Yesterday I did a days work. It happens occasionally. I was helping a friend who is a professional gardener so it was mainly grass cutting and weeding. It’s fairly physical but I wasn’t tired this morning so I did a not too hard ride.

We’ve had no rain for a few days but some wind to dry the trails. I thought that the technical sections to Brinscal woods and back would be a good test, with a chance of riding without a foot down.

The section runs along side a goit which is a river, straightened into a channel. The water then fed some lead mine workings. Copper and barium were also mined nearby. I could have taken the easy trail on the opposite side of the goit but I like the challenge and have mention before that it is one of my targets for the year to ride in both directions without a foot down.

You can ride the trail in 2 ways. Carefully picking your way around rocks or blasting at it beating the rocks at their own game! I use a mixture of techniques but generally find that it’s better to keep your speed up. At the first tricky climb I came close but had to paw the ground with my right foot to stay upright. I rode the rest clean and still had the challenge in the opposite direction to try. Again the first tricky part caught me out. I was just about to get over the top of the climb when my front wheel was diverted. The back wheel followed and I lost traction. The picture at  the top shows where I stopped. The rise is about 4 feet or 1.2 meters and is steep with roots and rocks. At the even harder next tricky part I again almost made it. I decided on the gentler approach but a root late in the rise stopped me dead. The step up is over 6 feet or 2 meters here. 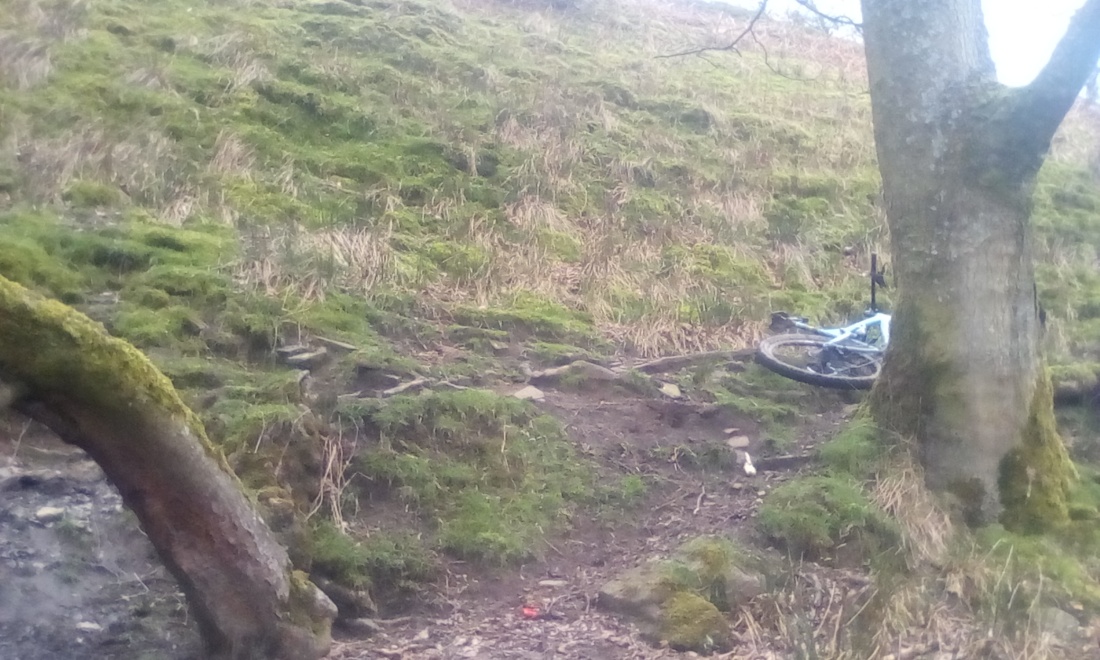 They say a picture paints a thousand words but this is not true. It looks easy in the picture above!

I’ll try to apply a method in future attempts which could be useful for all kinds of challenges in life. I will not allow a timid approach to thwart my effort, expecting failure. I’ll do it with energy and confidence which will give me a much better chance of success, I believe.

I enjoyed the rest of the ride back over Healey Nab and hope the dry weather continues until at least Sunday for my next ride.