The weather has been lovely today, but not especially warm. I would have waited until tomorrow to ride but I’ve been asked to do a days work. I can take the dog along, so that’s alright. He’s never been out with me for a day of gardening and is not the kind of dog who could be left to roam around whilst we work. He’ll have to be tied up on the lead.

Because I’m working I only rode 2 laps of Healey Nab which is too short a ride for my taste. There were a few riders practicing on the unofficial downhill trails and an E bike rider on a Cube bike. He said it was chipped to go a lot faster than the legal limit of 15.5 mph. I hope he doesn’t record his rides with Strava. That would be blatant cheating, though I imagine it goes on all the time.

On the open sections of trail the ground has dried up well but under the trees it’s still quite damp. I decided to ride the open field downhill after my 2 laps but it was still absolutely soaked. I rode my Whyte JW4 and all went well. I mention Healey Nab a lot so I took a couple of photos to try to give you a feel of what the trails are like. It’s fairly typical of manmade trail centre riding where every corner is a berm (banked corner). The hill is made of sandstone so it’s fairly well drained with no standing water on the descents, though there are still puddles on the climbs.

The picture at the top shows about 6 alternative lines running right up to the stone wall in the distance. These are black graded to indicate that you need to be an experienced rider. The picture below shows the red graded route where it turns round a sharp right hand corner. 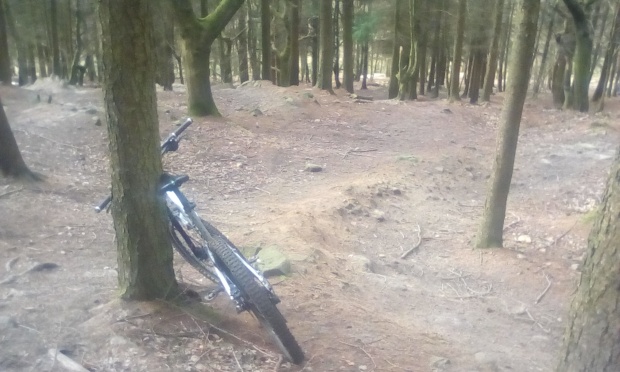 The tree to the right of the trail looks as if you could clip it with your shoulder but there’s plenty of space when your riding. The modern idea of much wider handlebars makes clipping a tree more likely. It’s funny how the first MTBs had really wide bars then we went for narrow bars for aerodynamic reasons. The change to more downhill oriented bike by most riders has turned the clock back 40 years!