On Saturday I’m setting off with 11 other fools on ancient, mainly Italian scooters for a battlefields tour of Belgium and Holland. My own scooter is a relative youngster at 30 years old!

Friday may be wet and I’m working tomorrow so today I did a last ride before the trip to Europe. I just wanted to do something easy so rode Healey Nab, taking some alternatives to the manmade trails. It was quiet. I saw only one other rider who was pushing £2500 worth of Orange 5 MTB up what is a fairly easy climb. I’ve never understood riders who push their bikes when they could be ridden. The trend is exacerbated by E bikes with their electric motors. Will this be the future or will bikes powered only by pedals still be common in the future?

It’s a strange experience for me to not really try to go fast on any section of the ride. I actually felt a little nervous on a couple of occasions, probably because I wasn’t fully committed to getting the bike down the trail at speed. Rather than thinking about how to keep the speed up I was thinking of the slight risks. I really must ride faster. If only for safety reasons!

The picture at the top of the page shows Healey Nab from the bottom of a fairly steep climb. It’s not a good ride in winter but in summer is a direct and fast way to the trails. A small tree, a birch, grows in the top of the wooden post that the bike is leant against. Below are 2 views which were taken from higher up the climb nearly forming a panorama. 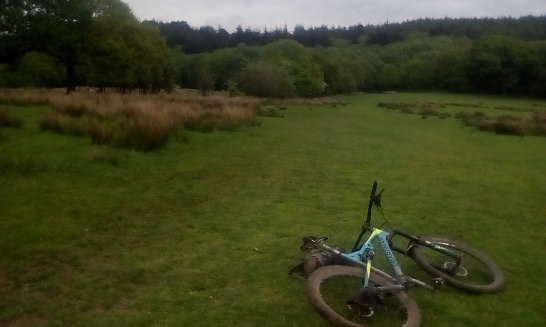 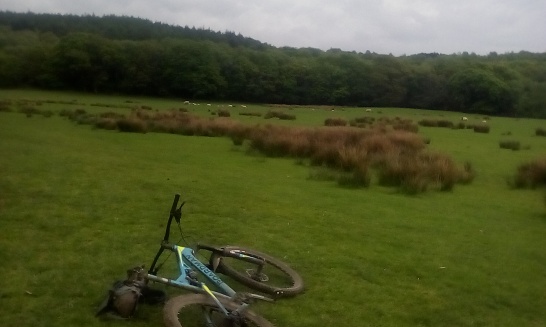 A fairly extensive area on the right side of the pictures has few trees but is almost trackless. I need to explore it before the vegetation gets too high, though I must have tried this before over the last 25 to 30 years. The red graded trail loops round the top of the hill in a 1.3 miles circuit.

I’d love the chance to take a mountain bike to Belgium to explore the Ardennes region which was the area of the Battle of the Bulge in 1944/5. It caused the biggest loss of life for the USA of any World War 2 battle as the Germans tried to divide the allied front. We are laying a wreath a Bure where 61 Lancashire paras died in the battle.

I’ll be on the lookout for good MTB riding, as ever. I probably won’t ride again until a week on Friday. I’ll miss the dog terribly……oh,yes…and my wife