Today’s objective was Darwen Hill which has the Jubilee Tower atop. It was built in 1887 to commemorate the golden jubilee of Queen Victoria and from the top you can see north Wales, the Lake District and allegedly the Isle of Man, though I’ve never seen it myself.

I started riding the hill regularly around the autumn of 1996 and the surface is surprisingly weather resistant so we rode it right through the winter, almost every weekend. We added in Sunnyhurst woods to make a long ride which got me and my mates seriously fit. I haven’t done many long rides recently so I didn’t know how hard it was going to be today. It’s an out and back sort of ride so there’s no chance of an easy escape route if you get fatigued. We rode the trail until someone discovered Wilderswood near Rivington, after which that fantastic down hill had to be part of every ride, weekend and mid week. We never returned to Darwen Hill as a group but I have occasionally ridden it on my own since then.

The period when we were riding it coincided with a period of evolution in the bikes we rode. At first we were all on hardtails with front suspension forks and some of the down hills were really hard, giving you arm pump and exhausting your legs as you tried to absorb the constant high speed bumps. The “Bone Shaker” in Roddlesworth woods was particularly hard and went on for a long time. I was the first to buy a full suspension bike, a Marin Rift Zone and although it only had a 78mm travel fork and 100mm at the rear it was a revelation. I could pedal hard down the trail and save a massive amount of time compared to my hardtail with it’s primitive 48mm Rockshox Quadra 10 fork. By the end of our time riding the area we had all evolved to riding full suspension and our riding would never be the same again.

Today I took a mixed road and off road way to Roddlesworth and rode easily up the recently resurfaced dirt road. Up onto the moor and I decided to take a promising looking left but it took me to a different hill to where I wanted to go. I ended up trekking across a trackless area and wasted a lot of time. I should have stuck to the plan! I decided that Sunnyhurst was going to take too long after my mistake so would ride to the top and back down the same way. I’d kept spotting the Jubilee Tower during the approach and it can be seen in the picture at the top. I also stopped on top at 1220 feet (327m) and took more photos. 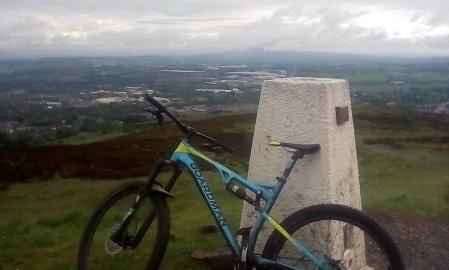 On the left is the 85 foot tower. On the right is a view towards Pendle Hill which has long been known as a haunt of witches!

Not riding down to Sunnyhurst meant that the ride down was not nearly as good as the high speed, high risk trail I could have ridden. What it did allow me to do was to ride a segment I’ve never ridden before. I found it on Strava and it’s called “Better than the bone shaker”. A very apt title. Can’t wait to ride that again in drier conditions. Despite the wet, slippery roots I managed to be 42nd fastest out of 218 riders on my first attempt. I love the virtual competition of Starva. I suits my small minded self aggrandisement.

I’ve also found that I’m 7th fastest ever out of 92 on “kitchen’s lost path of doom”! which is a technical climb. I was taking it easy, as well. I’ve ridden it occasionally over the years but will view it as a challenge from now on. I rode down through Brinscall woods but took the easy, right hand side of the goit.

Back at home I felt surprisingly fresh and drove to the Lake District with Ali, my wife and Freddie the dog later in the morning. In 2 hours 26 minutes of riding I covered 20.97 miles and climbed 2,033 feet of ascent. Next time I’ll definitely include Sunnyhurst but also fancy doing a different ride with 2 runs down “Better then the bone shaker” to get better at it. I could also have a full on attempt at the lost path of doom!

It was a great ride with so much more to tempt me in the future.