In the mid ’90s I’d often ride a trail with as little road riding as I could manage, not repeating any section. More often, though I’d ride to a favoured area or section of trail and session it. Riding the same part repeatedly to improve my riding. This is a very valuable tool to improve your skills. I’d usually time the section to keep getting faster, concentrating on the little details which can make a big difference to your speed. When I met other riders they generally just wanted to ride a trail and never repeat sections and today’s was just such a ride. The big difference between then and now, though, is that I’m now using Strava to track my ride and so, if I want to do, I can race against every rider who’s ever ridden sections of trail also using Strava. It adds an element of competition and excitement to what could be a very ordinary ride.

Today I rode to Worthington Lakes which are not truly lakes but reservoirs a few miles away from home. I knew there were 2 particular Strava segments I’d like to have a go at having ridden the area about 6 months ago. The ground is wet from recent rain so today’s times would not be as fast as I will be able to go, especially if I session the segments to improve on the details. Firstly I rode through Duxbury Woods, a pleasant enough ride but not especially exciting. I then crossed an open field and went back into a good, downhill, wooded section before a tricky climb through more woodland. I then arrived at Ellerbeck, a former coal mine which has had all buildings removed and has been allowed to return to nature. It’s now heavily wooded but has plenty of useful trails, many of which have been created by off road motorcycle riding. I could hear a couple of bikes today and as I lifelong motorcyclist/scooterist I shouldn’t disapprove!

I took a gravel road to join the canal where another suicidal squirrel crossed closely in front of me. I headed towards my first objective, a fast downhill, a stream crossing and short uphill to the finish. I was in a tunnel of trees and the darkness adds to the sensation of speed. My maximum reached 31.3mph but I slowed a lot for a left hand kink before splashing through the water for about 10 feet at the shallow ford. 2 women were running so I made sure I slowed and gave them space. The cold water soaked me from the back. It’s not surprising that the segment has been named “stone me that’s FREEZING!!!!!!”. My time was 62 seconds making me 24th fastest ever out of 167 riders. Not bad considering but a lot slower than the 43 seconds of the King of the Mountains.

I climbed back onto the Leeds-Liverpool canal and after a few hundred yards turned right through a narrow gap in the bushes for my second targeted segment the “Worthy Enduro run”. This is a longer ride starting with some great single track through the woods. It was slippery, especially over the roots which protrude from the soil. The gradient varies with some short climbs after the down hill. I lost my way after the half way point and rode to the right of a pond when I should have gone to the left. It was muddy and the trail was blocked by a fallen tree. I had to get off and carry the bike over before rejoining the correct path. It must have cost me a minute, after which I didn’t put full effort in. I was amazed to find that my time was 4th fastest ever at 4 minutes 21 seconds. The fastest ever seems like a target I could achieve at 3 minutes 44 seconds. OK, so only 34 riders have recorded a time but to have another King of the Mountains logo on my Strava page is something I’d welcome. When the weather and trails have dried up I’ll go back and have one or two trial runs at a medium pace before committing to a full out attempt. I’m having a great time on the bike this summer already. So much so that I forgot to take any photos so I snapped a few in our back garden to brighten up my post. 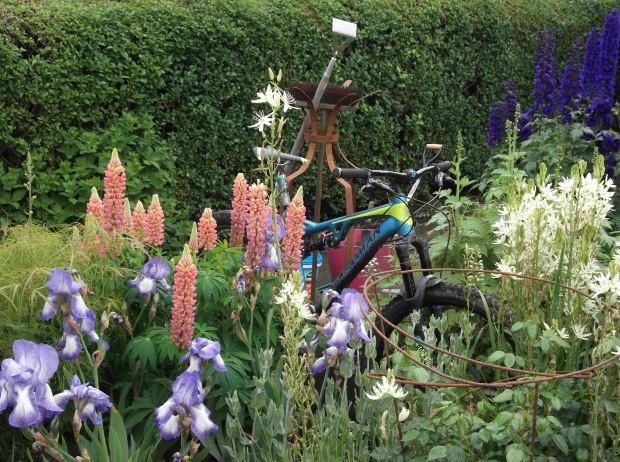