We had a hot, dry Easter and the weather afterwards looked good. Since the beginning of June, though, things haven’t looked so bright. Today’s Wednesday, the eighth day of rain and the future is looking different to what we’d expect in June. The jet stream is the main determining factor in our weather in England. If it’s to the north of us we get warm winds from the tropics. If it’s to the south we get polar air which is cold and tends to bring rain as well. In the next few days the jet stream will sink as low as north Africa and be fragmented to the north of that so more rain is inevitable. I don’t suppose the Global Warmingists will be phased by this. They’ll describe it as an expected anomaly within a general pattern of warming. Just like around year 2000 when CO2 levels continued to rise but the average temperature resolutely remained flat. Statistics are a dangerous weapon in discussion. You can prove anything by being careful to select the right statistics but bearing in mind my extensive reading and former involvement in the field of spectroscopy, I must say that I fall into the sceptical camp. The very long term outcome will always be a new ice age, whatever the mega rich (on the back of GW theory) Al Gore might tell us.

I know in some parts of the world you might avoid the trails if they’re wet but here we ride all year round, regardless of the weather. It’s just part of our culture to pretend that the rain doesn’t bother us and you can still get some good riding in despite the wetness but it has been nice to have a relatively dry winter and spring.

Today I decided to avoid the trails and do a road ride. We have plenty of places which you can ride even in the muddiest conditions but I just remembered that I’d have a lot of cleaning up to do if I didn’t stick to the, admittedly, damp roads. To make the ride worthwhile I’d take a route with plenty of hill climbing to mimic the up hill slog of many a mountain bike ride.

Past the school where my wife, Ali, teaches and an undulating road took me to the north end of Healey Nab. A short climb got me around the back to a long reservoir where I climbed up steeply in my second lowest gear. After a long climb comes a long downhill to the far end of the reservoir and then I reversed the route. I enjoyed the exercise but road riding lacks the thrills and spills of riding the dirt. I’ll never be more than an occasional road rider. Strava told me that I rode 14.47 miles and climbed 1084 feet. Having said that I noticed a straight on my trace where I’d lost GPS contact. Strava believes that I reaced 60.6 mph at some point! Highly unlikely. I did find that on one downhill segment I was 205th out of 7005 riders with a more realistic maximum of 37.6mph. Those road riders must lack the balls to just let it go on this section!

I can’t wait to get back to the dirt at the weekend. 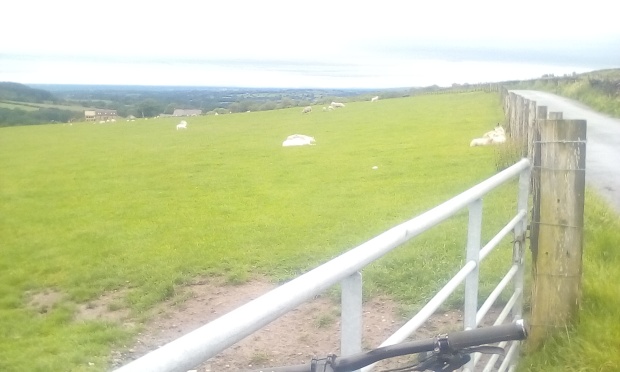 This picture demonstrates the shockingly poor camera on my phone. With the naked eye I could see the Lake District mountains over the ominous sight of the nuclear power station at Heysham. The picture at the top shows a view of Ashurt’s Beacon and Harrock Hill which were part of my childhood playground.