Point Break was a 1991 action movie starring Keanu Reeves and Lori Petty. If you’ve never seen it, it’s well worth looking up. It is a crime thriller centred around surfing. My connection with today’s mountain bike ride is simply that when Keanu’s character asks Lori’s why she does it she says, “For the ride. For the ultimate ride”. Today’s ride wasn’t planned with the intention of searching so high but it turned out to be a massively fulfilling experience and I can now bask in the great memory.

I fancied a trail ride but thought it would be good to do the fantastic trail down Great hill, which is to the north west of Chorley. Including a few undulations and a return over Healey Nab I climbed a total of 1,490 feet and covered 13.62 miles in 1 hour 46 minutes. I took a familiar route to White Coppice but avoided the side of the reservoirs in case it was overrun with anglers. The technical trail from White Coppice to Brinscall woods went well. At the hardest part I accelerated to let the momentum carry me through. Then the climb started in earnest. A 744 feet climb with a little downward slope on the first steep section. I reached the summit still feeling quite fresh. All my photos were taken from the stone cross shaped windbreak on top. The picture at the top shows the haunt of witches, Pendle Hill to the left and Darwen Hill with the jubilee tower to the right. 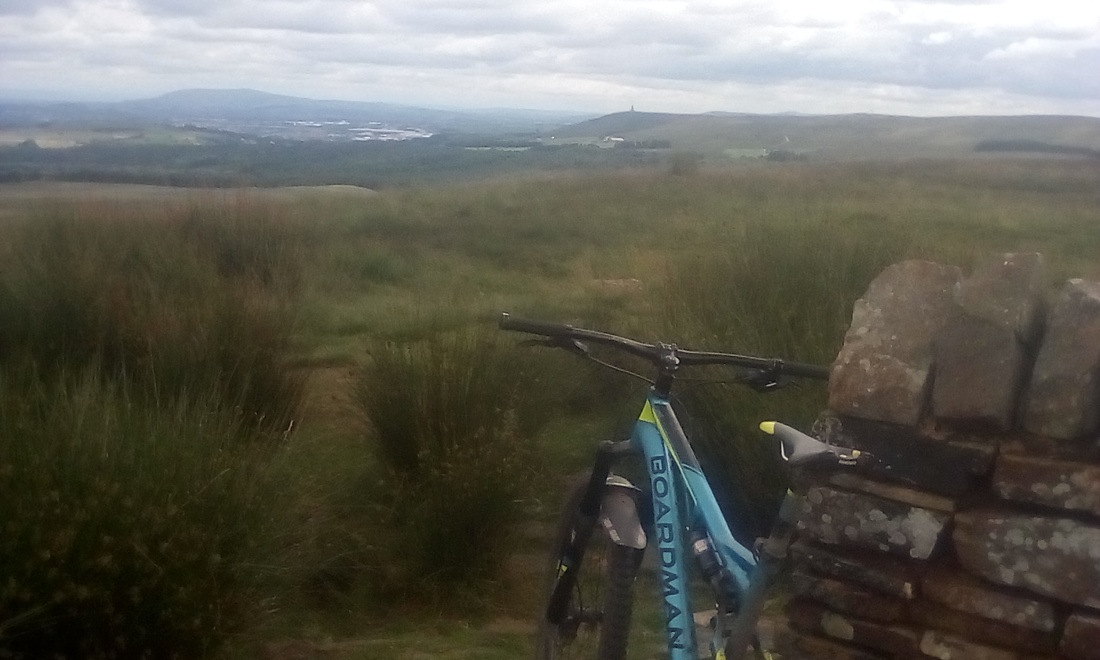 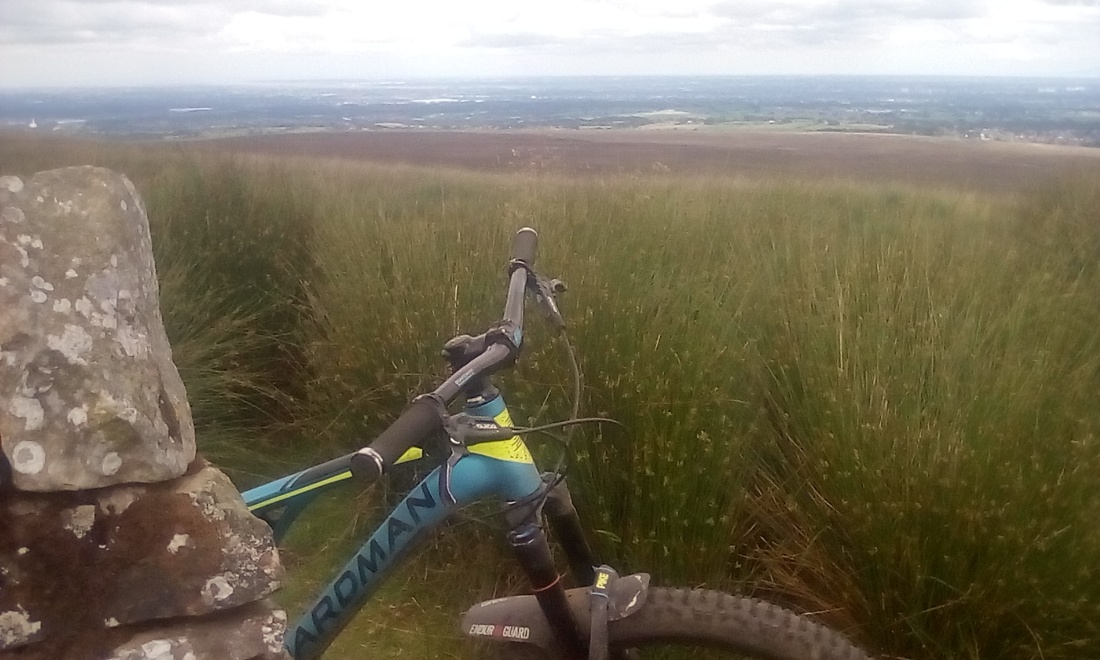 The Lancashire plain and Fylde peninsular beyond the city of Preston looking west. 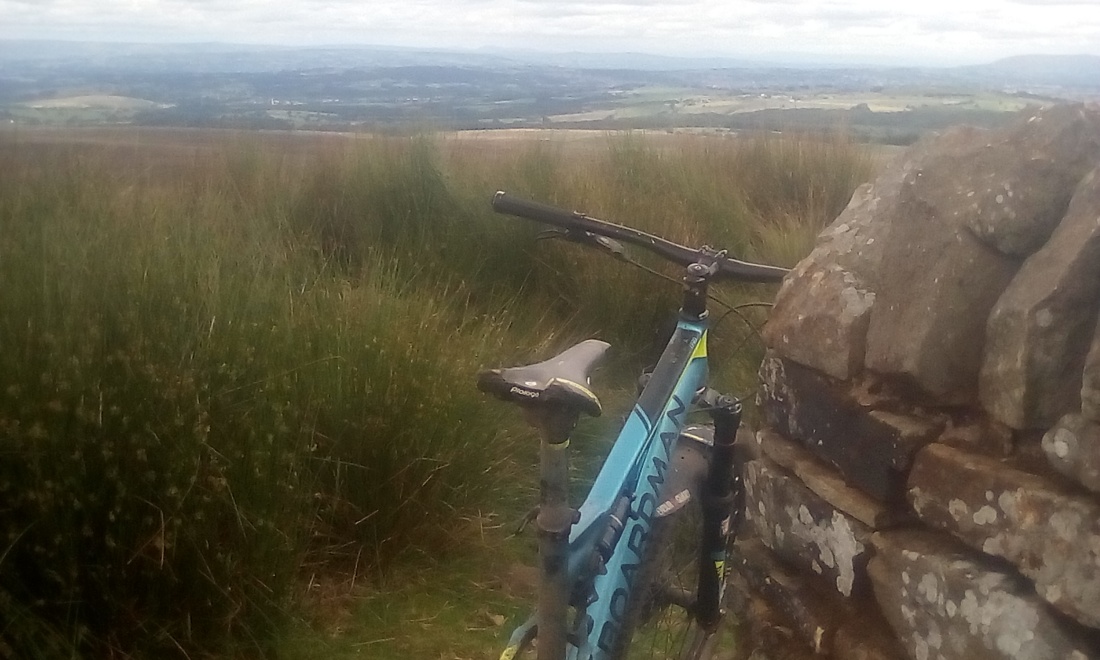 The Yorkshire Dales were visible to the north west. 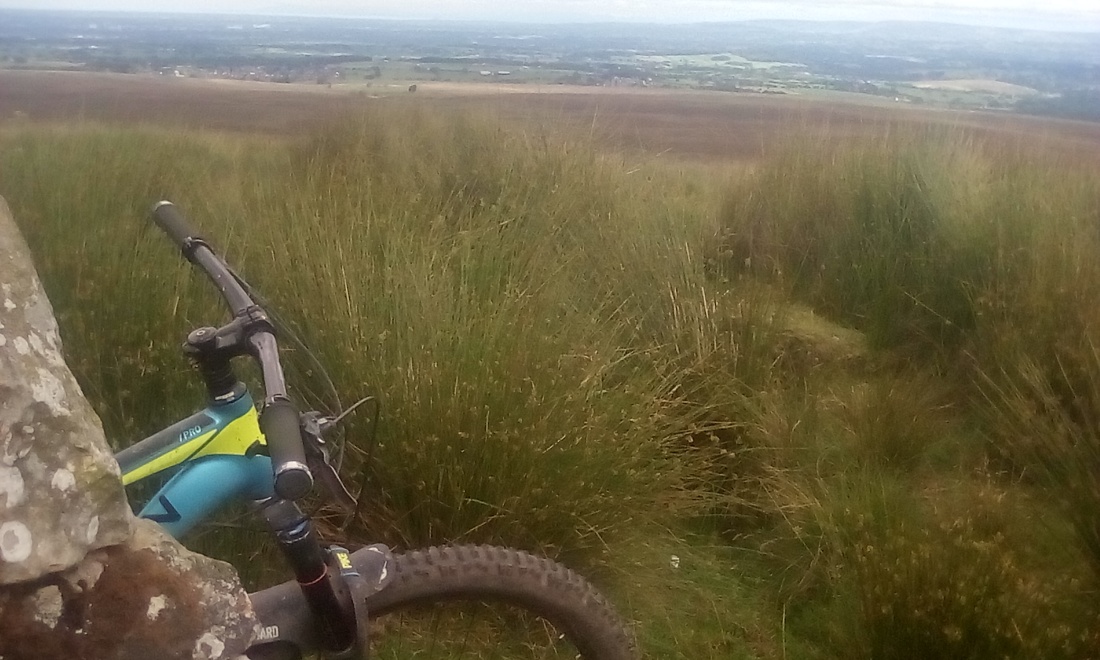 With the naked eye I could see the Lake District across Morecambe bay.

I was determined to make safety rather than speed my priority on the long downhill. It starts with an action packed roller coaster of trail which unfortunately ends at a stile. There have been times when I could have saved 30 seconds because the stile had been broken. Unfortunately I would imagine the damage was caused by irresponsible riders because I can’t imagine who else it would benefit. Over the stile the trail drops steeply and is a mixture of dirt, grass and rock. You can really get some speed up as the trail turns to a drier, stonier surface. One stretch has some really pointed rocks, some of which are large. I’ve mentioned previously that it’s cost me punctures and even a broken wheel rim. I got through it and as the surface became smoother and grassier I took the responsible decision to slow for 2 walkers. Back up to speed and into a smorgasbord of trail obstacles which would make a superb Enduro World Series segment. The broken surface dips and twists savagely. The rain ruts running down the line are itching to catch a wheel and pitch you off. It’s such a tough battle to maintain your speed. I kept an eye on safety but fought hard. The thrills continued on more open ground followed by a steeper gradient and the chance to pick up massive speed. More walkers but I was only held up a little. The last part of the descent is the toughest of all. There is drop off after drop off where the bike falls through the air, often landing on loose rocks up to football sized. If I’d slowed I’d have felt every bump but with sufficient speed I surfed as if the rocks were liquid. I slowed for a group of girls who were clambering up and it broke my rhythm. At the bottom I was buzzing with just Healey Nab left to climb and ride down.

My 7 minute 18 second descent placed me 59th out of 914 riders on Strava. I could throw caution to the wind and cut that by a good margin but I’d rather just enjoy the ride. I have no reason to take the unnecessary risks of a full on attempt. 20 years ago it would have been,and often was, a different story. Still, I was pleased to set off after a much younger rider down Healey Nab red route. He took a short cut at first but by half way down I got up behind him. He pulled over for me to pass.

OK, so it wasn’t the ultimate ride but it was a big thrill. I don’t think any one ride could be somehow the ultimate. I’ll just keep working to make every ride worthwhile and enjoy the best sport there is.