In England we tend to ride all year round. I’m sure plenty of riders only go out when it’s dry but if you’re dedicated you’ll find you have little choice but to ride in wet, cold and muddy conditions. Years ago I soon found that you need to be a lot more selective about where you ride when the weather turns against you. I almost never call off a ride due to mud. If the rain is coming down horizontally (an oxymoron!) I can always wait until it stops. Today was definitely showing signs of being autumnal. It wasn’t cold and the rain stopped early in the morning but the ground has had a good soaking for a few days and having not ridden for 4 days I was desperate to do something. I chose to go locally on some mainly hard packed trails which I hoped would be free from walkers. Most of the schools start back on Wednesday but with wet ground and an early start I was mostly alone.

I often take a steep off road climb to avoid a road section and managed the 2 hard parts despite the slipperiness. After a road through housing it’s a fast downhill to the former mill at Birkacre. It has only 3 corners but they need some thought since you need to brake for each one. I then spent some time at a little playground for mountain bikes. It has a particularly good 3 corner combination which I’ve loved since first riding there in 1992! You may think that it would be boring to ride the same section over and over but the thrill is that you can find the absolute limit of grip and hence speed. It might not seem impressive in terms of miles per hour but when the tyres squirm in protest as I muscle the bike around the turns I find myself in a special place. It’s a nirvana and very addictive. Do other riders get the same thrill from finding the limit? Some surely must but I know from previously riding with friends that a lot of riders like to keep the wheels firmly planted on solid ground. I like it far better when the ground feels like a fluid underneath me and today was a fine chance to enjoy it. 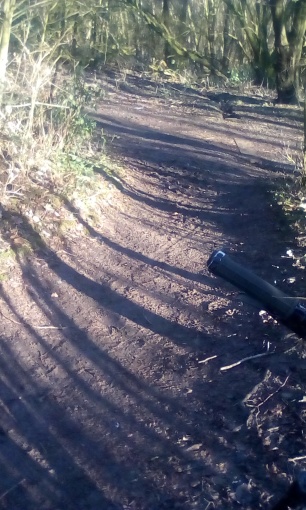 I’ve ridden these corners longer than I’ve been married. Both have stood the test of time. I’d better leave it at that!

I went to another part of the area and carefully rode a man made jump line before doing a circuit of the whole area. It’s only about a mile in length but packs plenty of action in including 2 climbs and 2 quality downhills one of which uses the 3 corners I’d already practiced on.

Next I rode to Coppull and around the large, old mill. Beyond this is a small area with a trail which punches way above its weight. I rode 3 laps and on the second lap had a big rear wheel slide which nearly had me down. Exciting! When I saw my Strava record later I was surprised to find that my third and last downhill was my fastest ever. I was already second fastest ever (out of only 8 who have so far discovered MTB paradise!) but beat my time from February by one second. I haven’t tried a really fast lap in dry weather and it’s looking as if I’ve missed my chance for this year. I’ve had a great time doing multiple laps and will be back many times I’m sure. The trail has at least 9 corners in the short lap and is like a mini roller coaster. Nice ride.