In many countries mountain biking is a dry weather sport. Fortunately in Britain we ride year round. We just need to make adjustments for the wetter weather. I have a few choices locally which still offer good riding in almost any weather. I’ve been riding at Birkacre and Coppull mill on my last 2 rides, which are both OK for wet weather riding but today I thought that Healey Nab would be a better choice. Birkacre is now a country park with plenty of walkers and dogs. During the week this is rarely a problem but it’s busier at the weekend, whereas Healey Nab has purpose built mountain bike trails. Walkers use the trails but frankly they do so at their own risk. Today I didn’t meet any walkers, only around 9 other riders. I woke up to drizzly rain this morning but by the time I got out after breakfast weak sunshine was filtering through the trees.

The trails were damp but not deep in mud so I was hopeful of some decent riding. I rode to the north side of the hill and up to the woodland and trails by a mixed road and trail route. Climbing to the trail head gave me a chance to check the conditions. There was some standing water but it was easy enough. I turned round to slide around 2 corners which are OK to climb but fantastic to use as a downhill segment. I once suggested to the trail maintenance team that we should use a different climb, leaving the current way up as a ready made decent. They showed no interest so when it’s quiet I often use the route against the arrows on the signs and I love it. Ever the rebel!

I used the top loop twice in my 4 laps. On the first and third laps I rode the red graded decent and 2 versions of the black graded on the other laps. I found the limit several times which I enjoyed. I think I enjoyed the less severe red routes better then the blacks. 2 of the other riders had exotic looking Merida full suspension bikes. They set off before me on my third lap and I could see from the start that I needed to wait a while. Even then I caught them up and they let me pass after a short distance. I think mountain biking must be at least 75% rider and only 25% bike. The bike may even be more significant when climbing than downhilling since light weight will then be a big help. I’ve also found that since I scrapped my Whyte JW4, with it’s unique front suspension, in 2011, I’ve never had a bike which climbs as well. 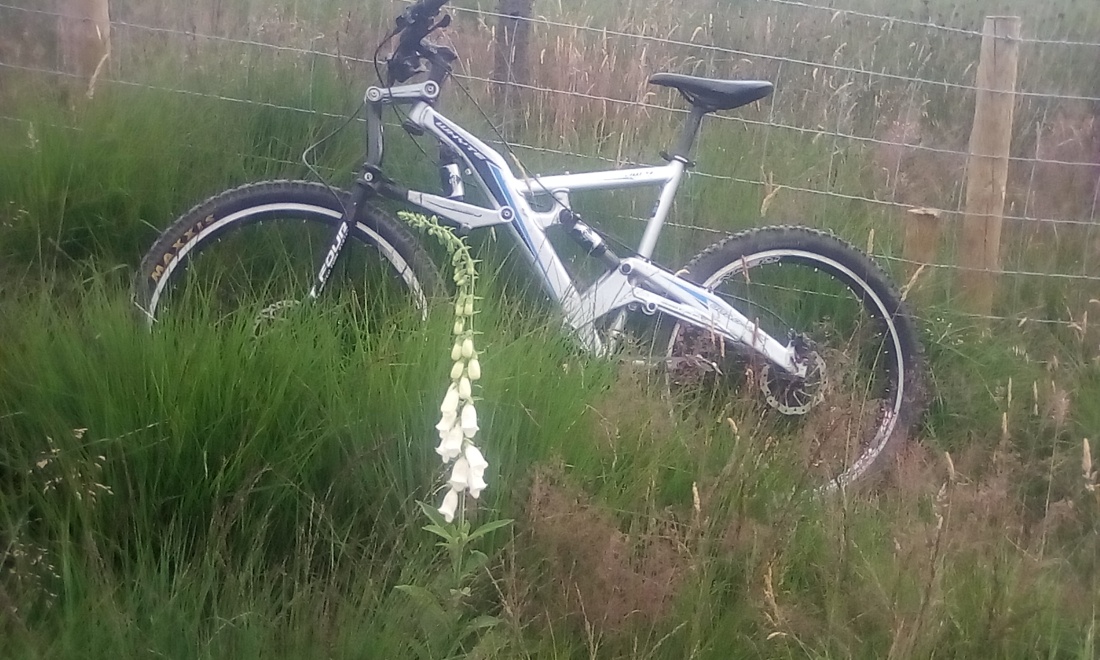 My current Whyte JW4 in the summer with a rare white foxglove.

At least until 2016 when I bought 2 second hand frames of the same design. That may be my only regret about the worsening weather. I’m reluctant to ride my 2 classic bikes with their less weather protected bearings and bushes. I’ve noticed some delphiniums flowering for a second time this year in my back garden. Maybe there’s still some hope of an “Indian summer” with dry trails?