I bought a 1996 vintage mountain bike on Ebay. It was cheap. Although there is a growing classic MTB scene prices for most older bikes are still low so if you can’t afford £100,000 for a classic motorcycle you can still afford to treat yourself. My newly acquired Proflex Attack LE cost me a mere £91 plus £20 shipping. 23 years may be a short time in some fields but in mountain biking it is an aeon. After all, the first mass produced MTB were only made a further 15 years before that time. Suspension forks started to appear in 1990 and were rather expensive. A couple of years later the Gary Fisher RS1 is usually credited as the first production full suspension bike though in 1990 Bob Girvin designed and started to market the Offroad RF-1, a bike with a limited amount of rear suspension but retaining a rigid front fork. Offroad morphed into Proflex subsequently and were a leading player in early suspension bikes.

I bought my first suspension fork, a Rockshox Quadra 10 in late 1995. It was Rockshox first effort at a budget fork and was shockingly poor! The 2 inches of travel was notchy and inconsistent but I knew from the first ride that if this fork could make such a difference to the way a bike rode, then surely full suspension was the future. I considered the Proflex Beast to be the best affordable option during 1996 but waited to the next year to buy the newly introduced Marin Rift Zone. It looked exactly like the bike I’d imagined and doodled on pieces of paper in idle moments at work. I loved it from day one and rode it from 1997 until 2015, though just about every component was in it’s third iteration, even the frame. I have continued to buy full suspension bikes until the present day and wouldn’t really want to own a hardtail.

It’s only recently, the last few years, that I’ve become aware of the interest in classic mountain bikes. It started when I bought a frame from a Whyte JW4 in 2016 and built it up. I’d owned a JW4 from 2005, which was then new old stock. It was the final version of this amazing bike, built in 2004. A brief test ride was enough to convince me of it’s merits. When I scrapped my original, because the pivots were worn out, in 2011, I regretted my decision when I found other bikes rode so differently. I now own A Whyte PRST4 as well, which is similar but of a higher specification. I’ve written quite a few blog posts about my rides on these bikes.

I’ve often wondered how my mountain biking would have developed had I bought the Proflex so I’ve been occasionally looking at Ebay. When I saw the Attack LE I knew I needed to bid. I placed a bid and left the house, not really expecting to win it but when I arrived home I was delighted to find I’d be getting a new addition to my stable. It arrived yesterday, I built it up and found the time for a short ride in the afternoon. The attack LE is a lower model than the Beast and uses elastomers for suspension, both front and rear, whilst the Beast used a coil with oil damping shock absorber at the rear. Disturbingly the Attack LE is fitted with a Rockshox Quadra 5 fork. It’s identical to the Quadra 10 which I’d bought in ’95. My worst fears were confirmed when i found just how poorly it performs.

Compared to a modern bike it is short in the wheelbase, with a remarkably low handlebar. The weight, though, is low at around 28 lbs. Few modern full suspension bikes are nearly as light, especially not at the budget end of pricing.

Well, I’ve ridden it off road. I felt stretched out by the low handlebars on my way to the trails. A bit of tweeking of the gear cable tension and I was feeling comfortable enough. The first trail is a dirt road with a rocky, hard packed surface. Into the first right hander and I’d taken a lot of speed off. That wasn’t enough to stop the front wheel skittering around on the small bumps. The back end, meanwhile, felt planted. I had found the achilles heel straightaway. The fork felt OK just squidging it but in the real world it was letting the rest of the bike down.
I rode down to Birkacre which has plenty of twists and turn with various, mainly gentle gradients. I was enjoying slithering around in the wet conditions but came unstuck on one of my last corners before returning home. I braked for a right hander and felt I was allowing it to drift out too far before the exit. I tucked it in a bit tighter and the front just went. I scuffed my thigh and took a chunk out of my forearm. Only flesh wounds and they’ll both heal but I also had to suffer the indignity of being asked if I was OK by a few concerned onlookers. Thankfully it’s no longer summer so I’m wearing long sleeves. My wife might not even notice.
On the way home I noticed that my weight was compressing the fork maybe half way, after which it takes a much bigger effort to compress it through a distinct notch.
Back home I twiddled the preload adjusters and set them to maximum. I compressed the fork hard and the left hand top cap flew off, the elastomer hitting me in the chest.
I have work to do. 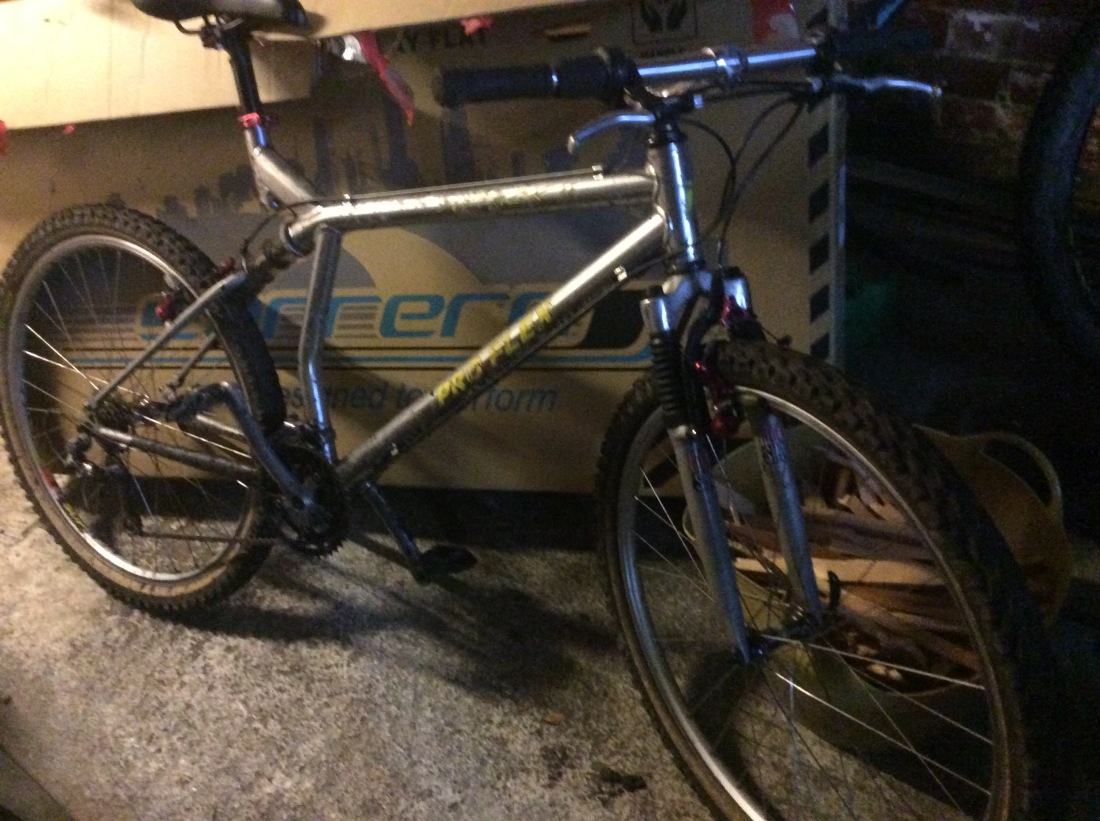 2 thoughts on “Nostalgia. Is it worthwhile?”