…..or, more precisely, a Beast. Stick with it, all will become clear. I thought that today was stupidly wet for an off road ride, though I admit this doesn’t usually deter me. My wife had told me after breakfast that she expected the certain demise of the washing machine if I went off road today, due to the quantity of mud it would have to deal with. Even though I could wash the bike and put the machine on so she’d never know, she’d know. So, all things considered, it was going to be a road ride. It gave me a chance to do some hill climbing for fitness and I also thought it was a good time to ride my recently acquired but 23 year old Proflex Attack LE mountain bike. As time has gone by MTB tyres have got wider and wider. This may be good for grip in slippery condition but the extra tread on the ground is bound to cause more drag. I’ve been convinced that old school, narrower tyres, traditionally run at higher pressures, allow you to go faster in many instances. This is particularly true on the road. The physics of the situation confuses matters. Friction is given by the weight pressing down multiplied by the coefficient of friction. No mention of the size of the patch of, in this case, tyre contacting the ground. The fact is when you’re riding off road the knobbles on your tyre grab the ground. This is adhesion. That’s why you not only get more grip from wider tyres, as a general rule, but you also get more drag. Drag slows you down and on a road ride your cornering speed isn’t the thing that will get you there quicker.

I wasn’t surprised that, with little effort, I set 7 personal best times in 20 road sections. I can tell from how my legs feel now that I put some effort in but the light weight, head down Proflex is probably the best road bike I have. I could feel the pressure on my wrists from  the very low handlebars and the ride is stiff, not complying with the ground. I’ve realised that the biggest problem is the front fork. It would have been poor when new but now I think the elastomers, which provide both spring and damper, have gone soft. About half the fork travel is taken up with the initial sag when I sit on the bike and the rest is notchy, the fork not returning as it should. Now if you’ve ever read my home page I reveal the fact that in 1977, at the age of 15, I built a suspension fork for my off road bike, which we called “scramblers”. So why not, now I have vastly better engineering skills and equipment, don’t I build another fork? I’ve often wondered why the first mountain bikers in California didn’t jump on suspension from the start. The fact is I did and whilst I’m sure many people came before me, I didn’t know anyone who’d done this.

Why I’m writing this…. Click to read the home page.

So today I had a piece of steel tube delivered which will form the basis of my home made fork. Most forks are telescopic. The bottom of the fork is a slider which moves up and down the stanchion, which sits inside it. The problem with this is twofold. Firstly friction in the bushes and seals causes the fork to stick a little, or in the case of the Rockshox Quadra 5 on the Proflex, stick a lot. This ruins the performance on small bumps and rippled surfaces. Then there’s bobbing. As you apply weight to the handlebars whilst pedalling, some of that weight compresses the fork causing it to bob up and down. This energy ends up as heat in the spring or damper. Any loss of energy means there’s less energy to propel you forwards, which is the main aim of cycling. Simple physics again. The law of conservation of energy.

I aim to build a fork rather like the one fitted to the top models in the 1996 Proflex range. They were named Girvin Vector, after Proflex designer and suspension pioneer, Bob Girvin. The picture below is the Proflex Beast. Hence I intend to change my Attack LE into something like a beast as I intimated at the beginning of the post. 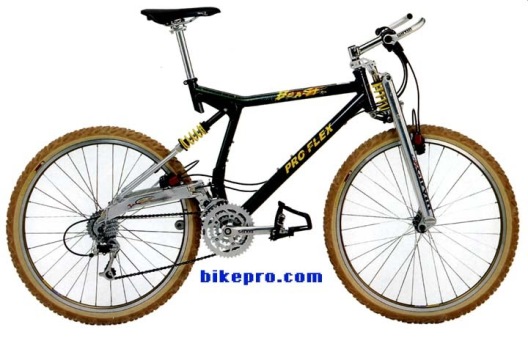 The Beast and my Attack LE are very similar except for the change to spring and oil dampers at the rear and the linkage fork at the front.

I will change the design of my own fork to give less bob when I pedal and more travel. I have an air/oil shock absorber in the garage and will give my fork around 80mm of travel. As a tribute to the great man himself I’ll call my fork the “No Bob Girvin”. Can’t wait to start building, the planning is done already.