Today I finally got out after a 6 day break which must be one of my longest breaks this year. I love Christmas but it does require a lot of preparation. I’ve also recently cut an oak tree down in my back garden. It was just getting too big after only 21 years. Who knew they grew so fast? We’ll get the trunk cut into useful timber but the thick branches I’m using to make the frame for a new building to house our forge. It’s a great project and I even chose to carry on working a few days ago, rather than go for a ride. With my wife now finished with work until new year I had someone to look after the dog so I thought it was a good opportunity to do a slightly longer ride. It’s been such a wet period so the mud has continued to get deeper. I needed to avoid the worst of the muddy trails and curiously that can often mean climbing. The hill tops drain into the valleys so that seemed like a good choice. I haven’t been up Great Hill for a while and it would also give me plenty of climbing up to it’s summit at 1,280 feet.

I didn’t stray off road until White Coppice, a small village at the bottom of Great Hill, because I didn’t imagine that the soaking wet alternatives would be any fun. After that it’s a straight trail along the goit, which is a straightened river, so obviously it’s also level. At the bottom of Brinscall woods I could have ridden the obvious route up the fire road, which climbs around 275 feet but instead I decided to ride further along the goit where there’s a much tougher climb to the top of the woods. There must have been some purpose for this track in the past because the surface is made from rocks set on their sides to make a durable surface. It was hard going to ride a rough surface on a steep climb but fortunately the surface changed to compacted dirt on the steeper, final section. After a steep tarmac section on Edge Gate Lane the gradient slackens on the gravel road up the moor. Later the surface becomes much stonier and the trail narrower. In two places the exposed clay was unrideable. It was more liquid than solid. I got to the top of the hill and took 2 photos, timing my stop so I could subtract this from my time on the Strava segment called “Great Hill out and back”. This was the segment where I had one of my favourite rides of the year. I had ridden it in 25 minutes but someone had beaten my time with 22 minutes and 20 seconds. I then beat this time by a single second and it was a massive thrill. You can read about it by following the link below. 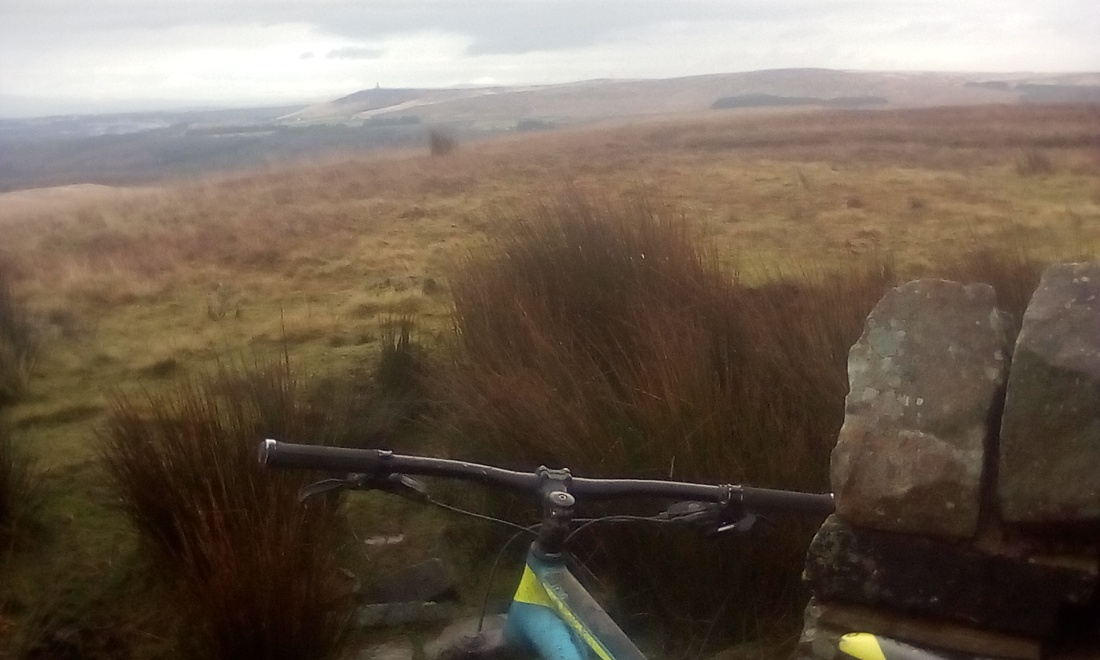 Darwen Hill and Winter Hill from the top of Great Hill, today.

My estimate of today’s time is 28 minutes 39 seconds. A lot longer than 22 minutes 19, admittedly but in today’s conditions it was a hard climb whilst coming back down the tyres dragged, robbing me of speed. For my fast time in summer I’d chosen to ride my 15 year old Whyte JW4 because it has a higher top gear but today the Boardman had a high enough gear because the speed was lower. There isn’t a massive amount of cornering or other technical challenge in this segment but I was enjoying putting some serious effort in on the fast, open downhill. After that I tried some obscure trails down through Brinscall woods but there were at least half a dozen fallen trees to climb over so it wasn’t a good choice. I was starting to feel the effort in my legs on every climb on the way home and finished with a ride over Healey Nab for it’s excellent downhill trail. I covered 17.17 miles with 1,583 feet of climbing. Comparing this with my plan to ride the Mary Towneley Loop next year I rode around 37% of the distance but only 25% of the climbing, which tells me what a big challenge this will be.

I enjoyed today and hope to ride on Boxing Day which is, after all, a traditional day for sport.