On my last ride I went to Healey Nab and rode 3 laps with no aim other than to go for a ride. I decided it would be better to have more structure to my ride this time and with little rain for around a fortnight I knew the trails would be improving. This meant that I had a little more choice and toyed with the idea of a trail ride near Winter Hill but this morning fixed on 5 laps of a circuit at Birkacre. It has more than 15 corners on each lap where you need to apply your experience and skills to keep your speed up. This means in 5 laps you have 75 to 100 nuggets of delight! Not only that, the trails descending into woodland give a massive illusion of speed, even though you’re not actually going all that fast.

I rode to Birkacre down the Strava segment “Drop to Birky”, where I set a King of the Mountains time last January. Strava claims I deviated from the trail but it just shows the inaccuracy of a cheap GPS, perhaps. Still this wasn’t my target. I rode to a flat place at the top of the area where I could turn around and found a suitable start/finish point for each lap. The lap starts with a descent to the lowest point followed by a continuous climb to the highest point, a little higher than the start. It then drops most of the way back down before a second climb to the finish. I decided to time each lap by stopwatch, stopping briefly to check my lap times before starting the next lap.

I set off for lap 1 and could feel the bike wriggling on the very first corner, which had me slightly off line for the second corner, so again I slid. This was pandering to my taste. After the third corner I crossed a grassy field and dropped into the woods. This is one of those exquisite sections twisting right, a longer left, a naturally banked right and dropping to a sharper right where a bank straight ahead can be used to steer you round, maintaining speed. A left had kink takes you down hill further to a corner at the bottom with a mixture of soft and hard surfaces for an unpredictable hairpin leading to the long climb. I was thrilled at the prospect of riding it 4 more times. After the climb is an equally high quality second downhill segment culminating in one of my favourite 3 corner combinations. The conditions varied from fairly dry to distinctly wet on the descent and were certainly challenging. Lap one had taken 7 minutes 52 seconds. 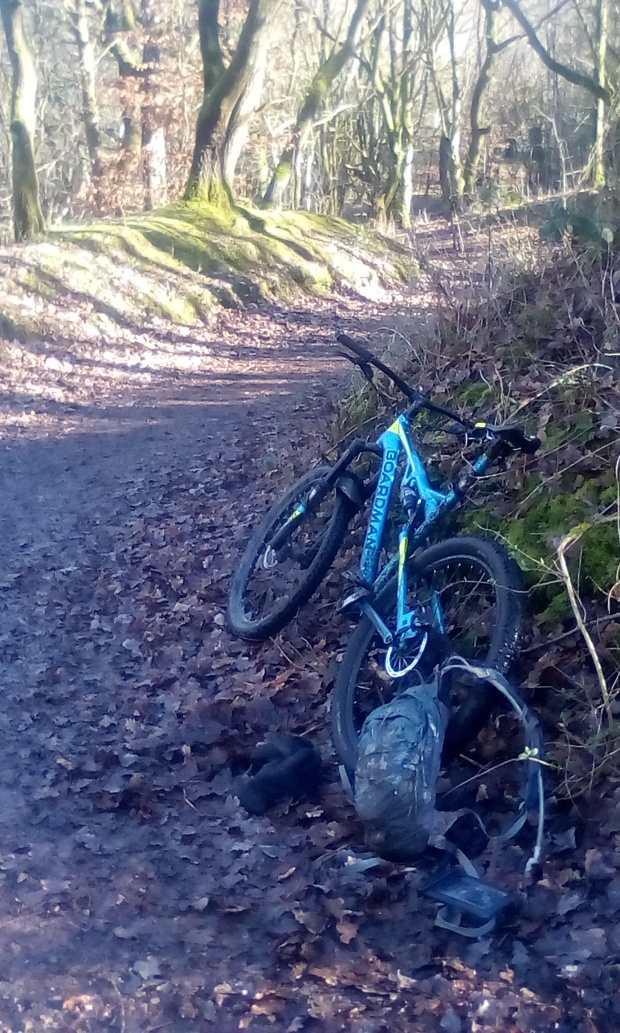 This is the exit of the first corner of my 3 corner combination, pictured last February.

Lap 2 felt a little faster as I settled into a steady pace but actually took 3 seconds longer. It could just have been my slowing for 2 walkers with a dog before the third corner. On lap 3 I noticed how I often slowed where the trail transitioned from one surface to another. When things went downhill I was taking it easy. I was allowing the bike to slow over muddy patches. I was easing into climbs after gentler sections. I took exactly the same time as lap one to complete lap 3 so determined to think about the transitions on lap 4. On the long climb I could tell I was breathing harder and wondered if this was just the effect of around 30 minutes of effort but would find the truth shortly. I made sure I put more energy in to each transition, rather than easing off but was still surprised that my time was down by a big margin to 7 minutes 29 seconds, over 20 seconds faster. I thought it might now be difficult to beat this time on lap 5 but decided I had nothing to lose by draining the tank. Early on the first climb I was wading through treacle but must have eased off and felt better further up the hill. The climb to the finish felt slow but I knew I wasn’t dropping the effort. I was pleased with 7 minutes 15 seconds, my fastest of the day.

Looking at Strava later I found that I’d set a 4th fastest time by anyone on “Climb on little loop” which correspond with my final climb to the trail head. Typically Strava had failed to stop when I stopped at the top 4 times ,so only lap 3 was correctly recorded. Still, fourth fastest is good, especially in damp conditions. My total for 5 laps was 38 minutes 23 seconds. I’ll use this circuit again for further training and it will be interesting to see how much I speed up when it’s dry. It was a quality ride.