I know “rising to a challenge” would be a more common phrase but because I want to climb around 6,500 feet of ascent on a single ride in a few months time, I need to get plenty of climbing done as training. I watched a YouTube video recently of someone riding downhill from our local TV transmitters so thought it would be a good idea to ride the trail in the opposite direction. The climb is over 500 feet with no respite. Before that, though, I’d need to climb over 600 feet on a road to reach the bottom.

Strong winds have been predicted, especially further north in Scotland, so this could add further challenge to today’s ride. I started mid morning and the route to Rivington contained some climbing already with a short rise and descent then a long, gentle climb on Long Lane. I dropped to cross the dam over the reservoirs then took the road from Rivington to the delightfully named Horden Stoops. The road reaches it’s high point here, running east to west but the hills drop to a low point along the north to south ridge. It’s a saddle point, obviously named after the shape of a horse’s saddle.

My ultimate destination from the same point.

Next I dropped to the village of Belmont. It used to be called Hordern but when a factory was built in 1804 the name was changed to something more attractive to entice workers to move there. I’ve checked and can confirm that the spelling of Hordern has subsequently been changed to Horden, for Horden Stoops! From Belmont it was a few hundred yards to the start of my big off road climb. It’s better known, ridden in the opposite direction as a downhill, and has been named San Marino after the Italian restaurant near the bottom. 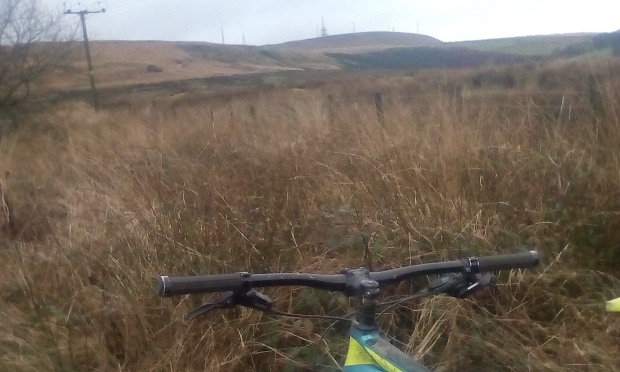 The climb of over 500 feet is at a fairly consistent gradient up to the transmitters .

No time to stop at the San Marino but coincidentally I ate pasta after my ride.

The trail used to be the line of a long conveyor belt when coal was mined on Winter Hill. The gradient is not severe but the surface has deteriorated over the last 20 years. It’s much rockier and today was made slippery with lots of mud. I haven’t  ridden the route for many years but had always managed the climb without stopping or putting a foot down. Today, though, it wasn’t long before an innocuous rise had me stopping. Several more times on the climb I lost traction over the rocky water bars, built to control erosion. I wasn’t finding the climb particularly hard but I think this was because in the entire ride I only climbed 1,953 feet, which was less than I’d expected. I’ll wait for dry conditions for another go at riding the hill without stopping. The wind had picked up a little and was helpful at times during the climb.

I intended to ride a fairly straight, steep descent back to the Rivington/Belmont road, which would have given me another, shorter climb back up to Horden Stoops. The wind had really picked up on the misty hilltop and I just didn’t see the path, instead finding myself heading for a trail I’d promised myself I would avoid. It’s the ominously named Gully of Doom! I was at the start of the trail by the time I’d noticed my mistake so felt I had no choice but to commit. I took it very easy on the way down. The rain water has, over many years, turned a footpath into a 10 feet deep gully, only 12″ wide at it’s stoney bottom. Usually I’d ride to the right of the gully on the rough grass but today this alternative was way too slippery so down the gully I went. No doom overcame me but the rest of the descent to the rocky track of Belmont Road was nightmarish.

I then rode the fairly level but stoney and bumpy Belmont road to the top of a very famous downhill known as the Ice Cream Run. In the summer an ice cream van is usually parked at the bottom. It’s another route I wouldn’t have chosen to ride, especially in today’s conditions but it was the obvious way home. It starts with an easy, fast gradient but the smoothness doesn’t last long. I was soon into a boulder field and could see slabs of bedrock ahead providing natural drop offs. I was going too slowly today, partly because of the wetness but also to save my wheels from a pummeling. This may have been a mistake. I saw that one of the drops was too big to go so slowly over, it could have thrown me over the handlebars so I chose to bail out by deliberately going over the bars and performing an elegant roll on the rocky ground. I didn’t even get bruised but found later, on the road, that I’d bent the replaceable mech hanger which positions the gear change mech. I had a spare with me but decided to struggle home without changing it. This down hill is so well known that even features on the trail have been given names. I chose not to ride over and drop off the “Devil’s Toenail” which is a 15′ long section of tarmac. There must have been a time when this trail was tarmaced but only this tiny piece is left. I finished the ride by road and covered 16.83 miles in total. It was a worthwhile ride with its bigger, continuous climbs and I was glad to find that it didn’t exhaust me. I need to do some longer rides before April.