I’ve noticed quite a few plants are starting to poke their heads above the surface in our garden and yet it doesn’t feel like we’ve had winter so far. The rain has continued, though today has been sunny at times. The wind has also dried the surface in the open but so much local riding is in woodland so this is of limited help. My only option for a short ride was to go to Healey Nab. I stuck to the road right round to the back of the hill, fearing that my usual off road trails would be soaking wet. The stoney dirt road up the back of the hill was surprisingly dry and I was pleased. I thought I could add some interest to the ride by putting some effort into the road section, then keep it going up the dirt road and over the stile to the trail head. I was working quite hard, whereas normally I’m just sort of warming up on these sections. I decided to stop at the trail head because although a Strava segment includes the whole off road climb plus a lap of the red graded route, I thought it wouldn’t be worthwhile trying to set a good time in the sodden woodland.

I stopped on top to take some pictures and found an error message from Strava saying that an error had occurred but the system was now restarting. Drat! Strava thought I’d only covered 1.5 miles in 37 minutes at 2.3mph so I knew I must have lost GPS contact. At least I’d enjoyed making an effort and then intended to ride 3 laps around the hilltop trails. First,though, I noticed a sign just before the top informing of the plan to cut down every single larch tree over the next 6 weeks or so. They’ve developed Sudden Larch Death disease and in order to stop the infection spreading they are to be removed. I may not get another chance to photograph the trees before they go. 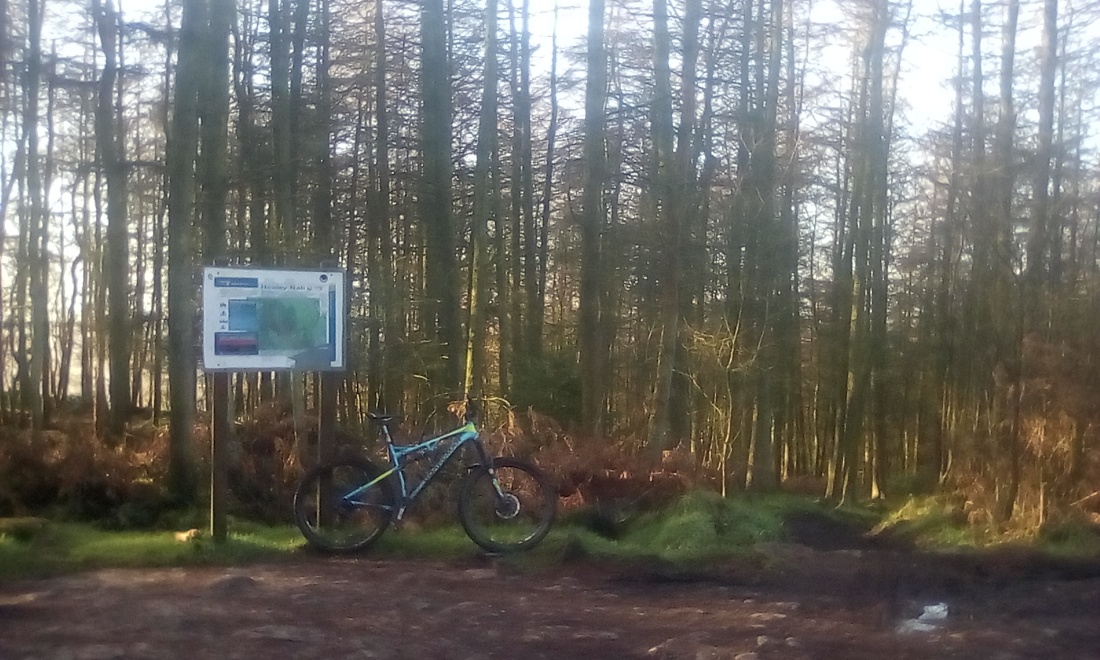 The trail head, near the highest point, is completely surrounded by larch.

A few self seeded birch trees may survive but my own fear is that bramble will dominate, as it does on another open area of the hill. 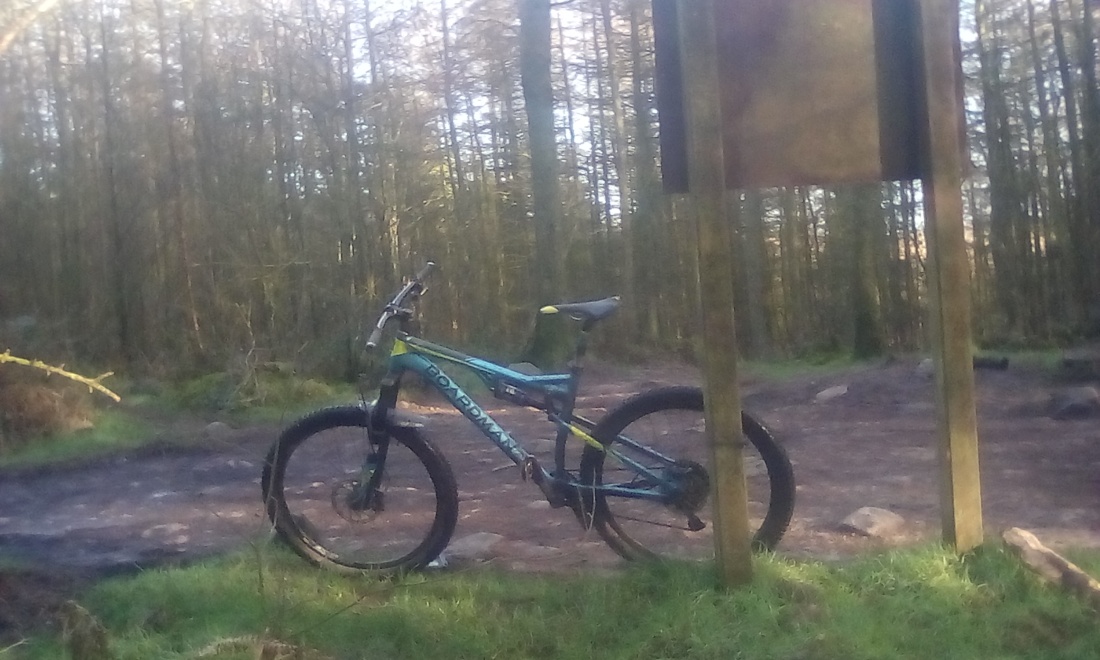 Trees in every direction, for now.

I sincerely hope the trails won’t be blocked for long by the tree felling and that the surface won’t be damaged. The trails here are man made with a weatherproof top layer. Today the conditions were seriously slippery but it’s all good practice. I find myself using the bent elbows, apply weight to the bars and keep the body low technique without having to always think about it. Weighting the front wheel in this way keeps the wheel gripping. The back end felt much looser but as long as you keep the front pointing down the trail, no matter what the back is doing, you stay on track. I was especially cautious on the approach to jumps. A slide as you take off can cause a big accident and dropping on your side from 6 feet in the air is never going to go well. Yes, I’ve been there, breaking ribs and a collar bone. Ouch!

The garden plants may think it’s spring but the trails were proving them wrong. Still, we have an area of high pressure coming for the weekend so I hope to get a bigger ride in.