This has been the claim after Storm Ciara passed over us this weekend. Plenty of places have suffered flooding but in Chorley it didn’t seem as severe. In fact yesterday the sun came out in the afternoon and it hasn’t rained since. The breeze has continued to blow which has dried the surface especially in more open areas. I didn’t have time for a major adventure today and the weather may have changed so a shorter ride up my local hill seemed like the best bet. I was curious as to whether any more trees had been cut down to stop the spread of disease but nothing was visible as I skirted around town. To avoid too much mud I took the road route around the back of the hill and could feel that the wind was a little blustery. In fact I found later that the wind was doing me a favour by blowing from a southwesterly direction. I set 2 Strava segment times which were each the third fastest I’d ever done, even though I was only warming up at the time.

I mused after my last ride, which was mainly on the road, about whether hills really add much more difficulty to a ride. Intuition says yes but since riding down hill requires no pedaling then you could claim that your energy use riding over a hill would only be the same as if you’d ridden the same distance on a level surface. I’ll be fascinated to see how I fare when I climb 6,500 feet on a single ride in the spring. Of course you may often be forced to up your effort by a climb. You can only slow down so much to keep the work rate down. I’m sure that it will be the biggest ride I’ve done in years but having such a target is a massive motivation. This highlights a problem with today’s ride. I just went to ride around the hill and look at the effect of tree felling. I had no target to achieve so no motivation to put extra effort in. That’s OK for the occasional ride but I’m going to have to plan my riding over the next couple of months to get my fitness to a good level. Could I ride the 47 mile Mary Towneley Loop at my current fitness level? I’d like to think that I could. I never have an off season and think that this winter I’ve got some good riding in but I’m certainly not going to underestimate the challenge.

Before I climbed up the back of the hill I stopped to look at some erosion which the weekend’s rain has caused.

A deep rut had been made on a sloping trail by the rush of rain water, covering the road below in debris. It was being cleared by a road sweeper when I passed on my way home.

The gravel road up the back of the hill had a similar rain rut. Fortunately it was confined to one side so won’t affect riding. I rode down the red trail from the top and soon found another effect of the weather. Lots of broken twigs were lying on the trail and a couple of bigger branches, one of which was too big for me to move. The trail was riding well enough. It drains well and the wind had dried the surface. The only evidence of the forthcoming tree felling was at the far end of the woods. Where trees had been torn from the ground a flat, surfaced area for vehicles and machinery has been made. I found later that the dirt track down to the tarmac has been resurfaced in chippings too. This will be a help in wet weather when the tree fellers have gone. 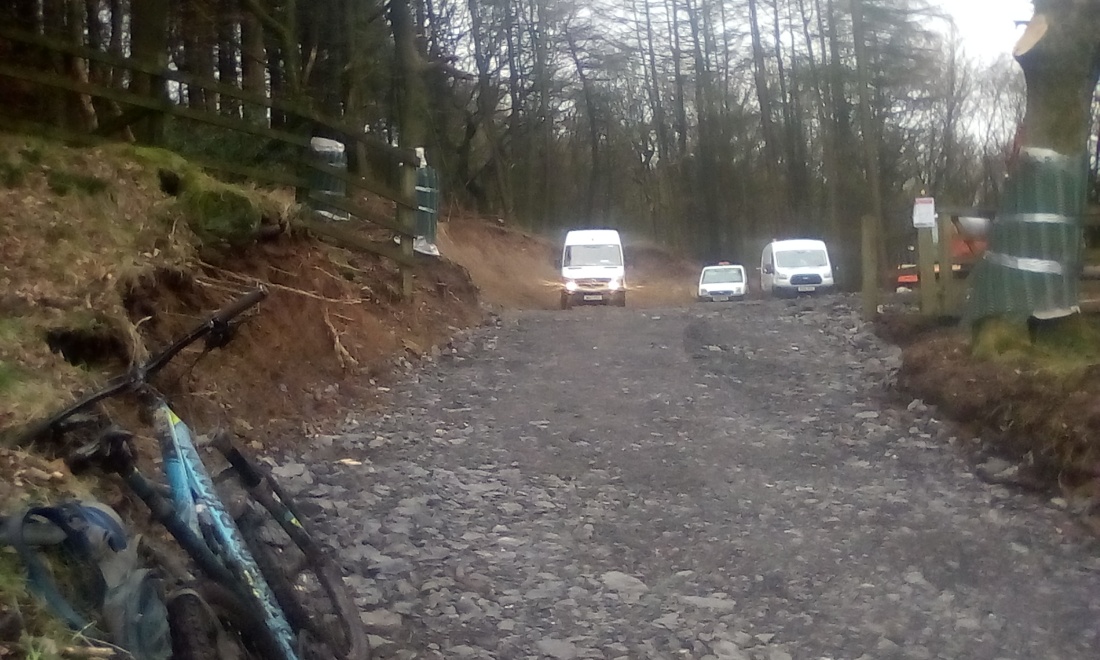 Looking back just before I rode home.

I completed 3 different laps, climbing a useful 1,083 feet in the process. The slippery trails were good fun and I seemed to be the only person on the hill, other than those who were working. As I’d expected after my recent road rides, Strava seems to have greatly underestimated the effort I put in. I’m sure I worked harder than I had last Friday but my power figure today was only 114 watts compared to 174. Apparently many have suggested to Strava that they add a separate mountain bike catagory to better reflect our efforts but the request has fallen on deaf ears. I’ll ride in a few days time when, hopefully, the forecast wet weather will have passed. I’ll make sure I plan a good ride, maybe up Great Hill or to Rivington.