Storm Ciara has departed but will soon be followed by the less exotic sounding storm Dennis. Today was still quite breezy but the sun shone for most of the morning. I took the opportunity to ride today and wanted something to focus on to give the ride more value. Great Hill seemed like a good idea. It offers plenty of climbing and a quality downhill from the top. It’s just the kind of training I need for my big challenge in about 8 weeks time. With the strong winds drying the trail I thought that the first off road section would be worthwhile. It was muddy but all rideable. The next segment along the reservoirs was likely to have a very difficult part so I took the road to White Coppice where a completely off road trail would take me to the summit. To make sure I put extra effort in I took a steep way up Brinscall Woods. After a flat ride along a straightened river the gradient then kicks up and needed my lowest gear. If the surface was smooth it wouldn’t be so hard but the fist sized rocks set into the ground take a lot more energy to ride over. This is made clear later because the trail does become smoother and even though the gradient steepens further before the top it’s definitely easier. This is where #strava can’t cope. As I showed in a recent post the app. is able to account for the difference between flat, climbing or descending. Sadly it’s not possible for Strava to assess the ground and estimate how much effort is required. Today I knew I could never hope to beat my target of under 22 minutes 19 seconds for the segment “Great Hill out and back”. Because of the tree felling on my local hill I’ve had to make this one of my two challenges for the year. I only need to beat the time I set last year and I’ll be happy. After the steep climb is a short tarmac road leading to a dead end where my targeted section starts. I’d been wondering how the wind would help or hinder my progress. At first the westerly breeze blew as a cross wind but after a gentle gradient the trail turns to the east so the wind was right behind me. 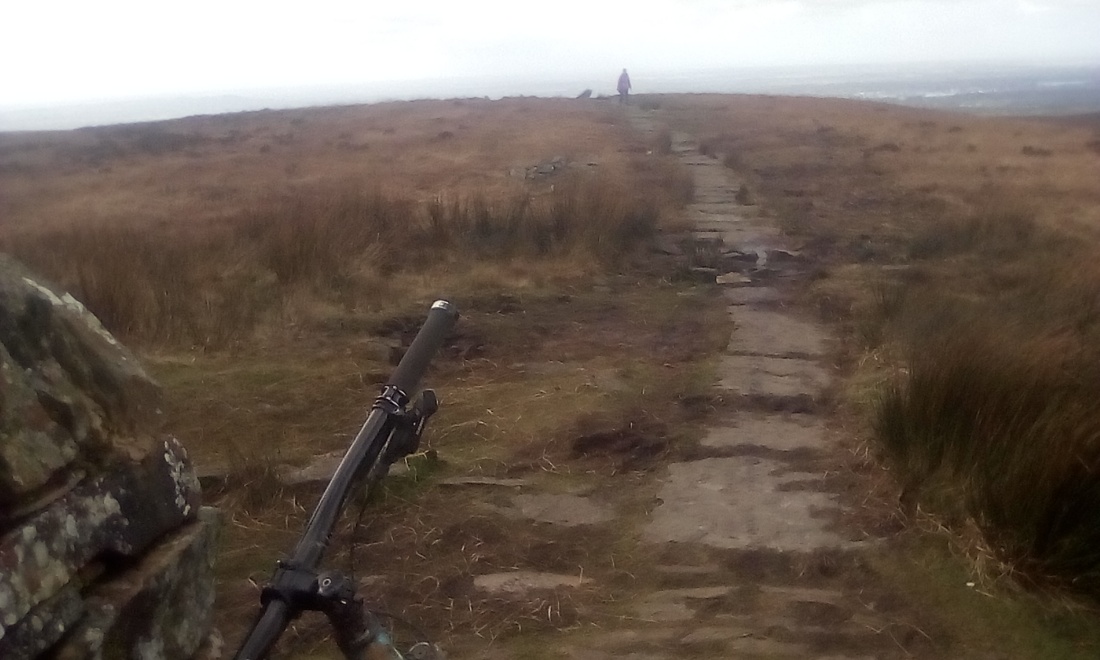 The view of the descent from the hill top.

A fairly large group of walkers were going up the hill so I did have to slow a number times but on the final section the tricky rock step ups have never seemed so easy. In fact Strava told me later that I’d done my second fastest last section ever. I set top three times on 12 segments because of the wind helping me. Coming down the hill the wind was directly against me and I just wasn’t getting that feeling of speed and flow. I’d mused on my climb as to whether a tail wind was better on the climb or the descent to save the most time. Intuitively I’m sure we’d all like help on the uphill and this is probably also the fastest. My reasoning is that with the wind behind on the way uphill will help you for longer and hinder you for a shorter time because you’re faster on the way down.

I’d stopped for a photo at the top so my Strava time is not important. My stopwatch time was 27 minutes 48 second. Much longer than my target but with the wind and gaggle of walkers it really means very little. What matters is that I put some good effort into my 1,368 feet of climbing in 15.53 miles. I enjoyed a slippery downhill through Brinscall Woods and rode back along the trail to White Coppice. From there I took a road route since the exit from Healey Nab is now blocked with tree felling machinery. It’s a shame because the hill adds an extra little treat to my rides. They are scheduled to be finished in 6 weeks and I hope this turns out to be true.

It was a good ride and I can feel the work in my legs now. My next ride is a bit uncertain due to storm Dennis!