I haven’t contracted Coronavirus, yet, but some estimates have 80% of us catching the disease before it’s run it’s course. Despite this, and even if I don’t contract the disease or the symptoms are so mild I don’t notice it, it may still affect my mountain biking. You could say that it’s selfish, when untold numbers will suffer, to focus on how it will impact my own life  but I’m in good company. In the movie “Julie and Julia” Amy Adams’ character says, “What do you think blogging is? It’s me, me, me all the time!”

If I do fall ill I’ll probably only miss 2 or 3 rides but whilst my fitness is still improving I could really do without that. I’ve been trying to find out a bit more information on how hard exercise might affect our susceptibility to infection by viruses. It seems that when we exhaust our glycogen we lose resistance to such diseases. Glycogen is the main fuel for the muscles. During short, very intense periods of activity glycogen is converted to lactic acid which builds up giving the kind of feeling you get by sprinting for 400m. During less intense exercise the body is still using up the glycogen but also starts to burn fat. This leads to the type of feeling a fit athlete gets after a couple of hours of exercise. It’s the “18 mile wall” for a marathon runner, where you really start to feel the switch to fat. Your performance will certainly drop at this point and although you may notice the effect at a certain point, the switch to burning fat is, in fact, a gradual one. To avoid a drop in your resistance to viruses it may be better not to get to this point.

My conclusion should be that I’d be unwise at this moment in time to attempt a long mountain bike challenge. Sadly this has become the main focus of my sporting year. I can still maintain or even improve fitness but I should avoid exhaustion. I’ve noticed how eating whilst cycling can stem that feeling of burning fat. When I rode just over 100 miles I had 2 good feeds and felt as fast at the end of the ride as I had at the start. I don’t know if I have the same level of stamina now because that ride must have been around 1994 but the loss of ability due to aging tends to be a loss of power, which gives you sprinting speed. Stamina may not be impacted at all so I may now be able to ride for at least as long as I could back then. I don’t think that now is the time to be making a final decision on my big ride. If the virus is fairly trivial for a fit person it might even be better to catch it sooner rather than later, though with a new virus we can’t really be sure of it’s effect. When my son was around 2 years old he caught Parvo B19 or slapped cheek virus. It’s a trivial complaint for a child. He lost his appetite for about a day and had red cheeks. He passed the virus on to my wife and I and the effect was massive. I felt exhausted for a couple of weeks and after that I noticed a measurable drop in my athletic performance, which I don’t feel I ever really recovered from.

My wife, Ali, is a school teacher and is still working. The argument is that if schools close many children will be left with grandparents whilst their parents work and older people are far more at risk from the virus. With all mass gatherings such as sporting events cancelled I don’t see this situation lasting. I’m still going out in public to walk my dog, Freddie, and the advice so far is that we should continue to do so. Dogs certainly contribute to our well being and he would hate a day without a good walk.

Pubs and restaurants are still open and I know from Facebook that a lot of my friends intend to carry on as normal. Many friends of mine have classic scooter as I do myself. The big events are all being shut down but our local clubs are trying to find alternative ways to meet up. Mountain biking helps me here. Yes, I have a scooter and do all the social things associated with that but it’s not all I do. I certainly spend more time on the mountain bikes than I do an a scooter and apart from the dangers from exhaustion which I mentioned above I see no risks from being alone in the countryside.

Yes, I’m feeling forced to change my plans but maybe I can find some new targets to replace my 47 mile ride. Everything feels up in the air at the moment. 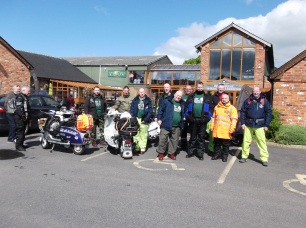