I wanted to have a go at one of my two targets for this year whilst we’re still enjoying dry weather. Last year I set a time of 22 minutes and 19 seconds on the Strava segment “Great Hill, out and back”. Excitingly I beat the existing time for the segment thus far in 2019 by a single seconds. It was one of my most memorable rides of the year.The World’s longest second. My target for this year is simply to beat that time. I’ve felt confident that I’ll be able to do it since I simply feel fitter this year. The wind has picked up over the last couple of days, bringing colder conditions from the North. This wind direction might help on the climb but hinder on the descent.

I rode from home and took the most off road route to White Coppice. The impassable mud at the side of the reservoirs has now dried up completely. The wind on the ride out was stronger than I’d expected which didn’t bode well for my attempt but at least the dry ground would be in my favour. I reached White Coppice to find the road to the cricket club car park coned off. A notice said that it was because of Coronavirus restrictions. It’s just the kind of place that has become a hot spot for people wanting a country walk. Cars are crowding into such parking areas, increasing the risk of the virus spreading. Since the notice read “Access Only” and I wanted to access the trail beyond I considered it to be OK for me to carry on. I took the easy side of the goit, a straightened river, and climbed the Brinscall Woods fire road. It’s steep but I was finding it easy enough. Up a short section of tarmac to a dead end and I was ready to start my targeted segment. 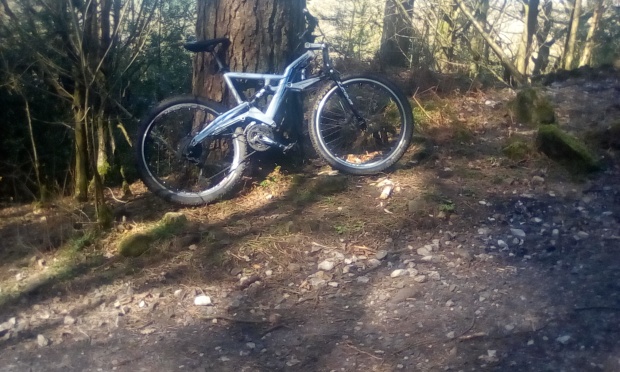 I set off and clicked my stopwatch, soon settling into a pace with the wind definitely behind me. The surface had been like a river over the winter and a lot of the gravel is lying on top, which impeded my progress. Later things improved a little with the surface becoming more hard packed. I felt that my speed was good. I was working hard enough but not tiring. As the trail turned eastwards I lost the advantage of the tail wind but kept the effort up. I slowed for a dog walker and checked the areas which had been deep in wet clay, even recently. Only the first part on the climb would need to be avoided, which would be the last part on the descent, so I made a mental note. I made sure I got the through the stile efficiently, wasting as little time as possible. The later stages are harder with more rocky obstacles and steep steps. On top I turned quickly in a tight circle ready for the descent.

The wind was coming at me from an angle and held me back somewhat. Back over the style I started to feel the effects of the work I done already. I approached the still muddy parts and lifted the front wheel over the first 2. As I approached the last one I was nervous so decided to reduce my speed and try to roll through. It was a big mistake but I was driving myself to succeed at this enterprise. The wheel sank deep and stopped the bike dead, catapulting me over the front. I landed on my front and could tell I’d bashed my left hand but there was no time to waste. I leaped back on, probably loosing 15 seconds or so, and tried to get back up to speed. As the trail turned northwards the wind fought me savagely. I just kept pushing on, even shouting a word or two of encouragement to myself at one point. Over 20 minutes at the limit of performance is too big an effort to waste so I threw everything at it only to find that my 23 minutes and 7 seconds stopwatch time exactly matched my Strava time. I honestly believe that without the wind and loose gravel surface I would have made it. My time to the top was, in fact, my quickest ever but the wind had killed my chances on the way down.

I started to think of how foolish I’d been to take the big risk which had me on the ground. It wasn’t a good plan at the best of times and now, with over stretched medical resources, it was selfish as well as dangerous. My behaviour probably defines just how much I love mountain biking and want to achieve my 2 targets. I’ll be back to try again but won’t put such an effort in if conditions aren’t perfect.

My hand was a little stiff so I told myself that I wouldn’t take any risks to beat the time I set on a Strava segment down Brinscall Woods. I approached the start on a trail I’ve only just discovered and found to be exquisite. It twists and turns on a loamy surface and it’s drawn me back several times. Then onto the section which Strava would time me on. And guess what? Once again, when I got going, I picked up speed. If I wasn’t going to achieve my target for the day a fastest ever time by any rider would compensate. I didn’t apply the brakes on the final, rocky, steep slope but found I was a second slower than last time, not the 4 seconds quicker I needed. I hadn’t started with the intention to beat the time so was unable to make up for a slower start later. I rode back to White Coppice along the goit and home by road. I must start riding more sensibly. One day.