I hadn’t expected to ride today but my wife, Ali, asked if I was going out on the bike so naturally I said that I was! All I needed then was a plan. I never like to leave home and plan a route as I go along. I loved my last ride to Brinscall Woods to train on 10 laps of a secret little circuit. Riding back home I rode a twisty, downhill singletrack which I can’t recall riding before. It’s clear to me that there are plenty more trails in the woods which I’ve either never ridden or forgotten about. The area is only half a mile wide by just less than a mile in length and the main thoroughfare is a gravel road which climbs from the southern end. Until the early 20th century the area wasn’t woodland but was occupied by a number of small farms and larger houses which were described as mansions. The water company which owned the land didn’t want sewage from humans or animals to pollute the river which runs into a nearby reservoir, so from around 1903 they refused to renew the leases on the land and by 1927 all the occupants were gone. The foundations of the demolished buildings are still evident and plenty of paths have been made through the woodland. Today’s mission was to see if I could find any new trails worth riding. 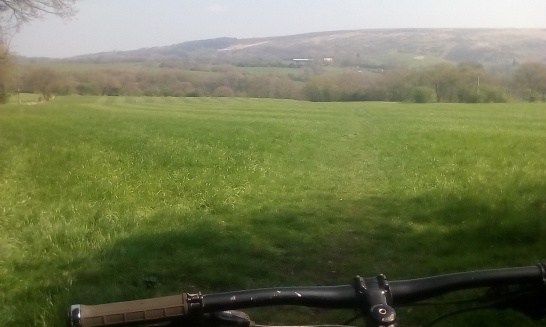 A panorama of the western side of Great Hill with Brinscall woods at the far left. The summit is barely visible in these pictures.

I’ve ridden Brinscall Woods for almost 30 years but found such a fabulous downhill that I stopped exploring any further. Later I did find another epic trail at the other end of the woods and knew a trail along the top edge but this has been blocked by fallen trees for the last few years. I set off from home and took a mainly off road route to White Coppice where I changed my initial plan to ride the technical side of the goit, which is a straightened river. Instead I set off up the trail which runs to the top of Great Hill with the intention to turn off towards the woods before half way up. 20 years ago I could have ridden the whole of this without stopping. Today I got a good way before I saw a particularly steep slope ahead. Maybe I could have done it but I decided not to exhaust myself so walked a short section. I did the same at the hardest part of all and thought I’d need to do the same on the last really tough part. Instead I dug in and took no prisoners. I was up with only 2 small sections which I chose not to attempt. I’ve got to be happy with that.

A while ago I rode a segment from the woods back towards the Great Hill descent which I thought would be quite good in dry weather in the opposite direction. It was! I worked quite hard because I imagined that this would be a Strava segment and was curious to see how I compared to other riders. In fact during the middle third of my ride I was in a Strava desert, not recording a single segment time. Are we really in such remote terrain here? Into the woods at the south east corner and high up I rode northwards along the top edge. Initially it’s a very hard rocky section which I haven’t succeeded on for some time. With my improved fitness and I think more self belief I powered through and turned left onto a single track I rode a number of times a few years ago. It runs down to the gravel road which dissects the woods and is high quality singletrack on a loamy surface with several exposed rock features. Today I noticed a left turn before the end and took it. This was what I was hoping for. Another long section of quality trail which took me close to the bottom corner of the woodland.

I climbed the gravel road to the top and turned right to reach the opposite corner. This was the start of the circuit which I rode 10 laps of on my last ride so I started with that quality and now familiar downhill. I then followed the trail which had been a new discovery to me on my last ride but chose a different option further down. The wheels were at the limit of grip several times to add excitement. I crossed the gravel road and carried on down hill. At the bottom I turned left to stay on the same side of the goit. I’ve ridden this trail before in wetter conditions and found it uninspiring but today it was enjoyable. I so often explore when conditions are wet and I know that more familiar trails won’t be at their best. I know this is the wrong thing to do and today proved it. In wonderfully dry weather I was finding new trails at their best and loving them. Have I found every trail in the woods? Almost certainly not but I’m now determined to do the work of exploration I should, perhaps, have done 30 years ago! 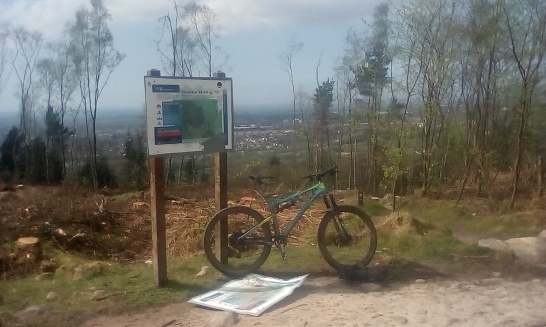 Later at the top of Healey Nab I took the picture on the left. How things have changed this year due to tree felling.

I took the technical side of the goit which unfortunately is still blocked in one place by a fallen tree and rode on towards the back of, and up, Healey Nab, feeling tired by now. There were a few rebellious people walking near the top of the hill, ignoring the coronavirus restrictions. I took the newly cleared downhill but also noticed that the start of the black graded version seems to have been cleared, which gives hope for the future. I climbed 1,347 feet in my 12.39 miles. I’d put some effort in and was quite fatigued by the end.