I had a decision to make before I set off today. I’ve been losing the chain from my Boardman’s chain ring because, I presume, it’s worn to the point of needing replacement. In an ideal world you’d replace the chain ring, chain and 11 speed cassette all together but I’ve had a bit of misfortune with the bike which meant I had to replace the cassette early in the bike’s life. I’d picked up a small twig in the transmission and it had broken 2 teeth from a sprocket on the cassette. I replaced the chain at the same time and replaced the chain again a few months ago because it had stretched. So the chain ring is the oldest of the 3 components. I’ve ordered one but it hasn’t arrived yet so I chose instead to ride my Whyte JW4 with it’s radical suspension, pictured at the top of the page. It has only 100mm of suspension travel at each end which was common in 2004 when it was new but trail bikes now have at least 130mm and bigger wheels, which roll over bumpy ground more easily. I enjoy the JW4 for it’s light weight, low drag tyres and the way the suspension bobs up and down so much less than other bikes when pedaling. This saves energy by keeping your shock absorbers cool and putting that energy into forwards motion.

I’d decided to ride back to Brinscall Woods as I had on my last ride, mainly just to ride the trails I’ve recently discovered. I hadn’t intended to try to find any more new trails. I rode over Healey Nab and found that the first part of the red graded climb has now been cleared after the recent tree felling. I took an old school climb to the trail head because the mountain bike trails higher up have been devastated. This part will certainly need to be completely reworked. I took another unofficial way down the back of the hill and pressed on to White Coppice, riding the harder side of the river. At the first really difficult obstacle I couldn’t keep going. The Whyte needs more effort and skill when the ground is more challenging and it’s also more tiring until the trail turned smoother again. I climbed the gravel road through the woods and carried on climbing a steep tarmac road which ends at the start of the gravel road up the moor. I chatted to a rider on an electrically assisted bike at the gate and he said he still likes to ride a non assisted bike. I do see the point of E bikes but certainly wouldn’t want one as my only option and think, at this time in my cycling life, I’d rarely ride one.

I rode up the gravel for a distance then turned right to take a great moorland trail to the top of the woods. It has a gentle gradient but there’s no lack of speed available on the rutted, rocky surface. Into the woods and turning right I was faced with a difficult undulating section which I conquered for the first time in ages last time out. The Whyte is very light at the front to skip over the protruding rocks and when I lost momentum I dug in and forced the bike over. I was happy that I’d managed the segment and that I didn’t have to blame the bike for not being as capable as the Boardman on this kind of terrain. Next came a downhill I’d ridden last time and it’s fantastic stuff. The trail has been ground into the loamy surface and allows you to find the limit of grip with gentle slides. On some surfaces a slide will be far more vicious but here sliding is fun. I chose a different second part to last time because I was going to climb back to the top of the area. I was soon at the north eastern corner ready for another, now familiar, and superb downhill. 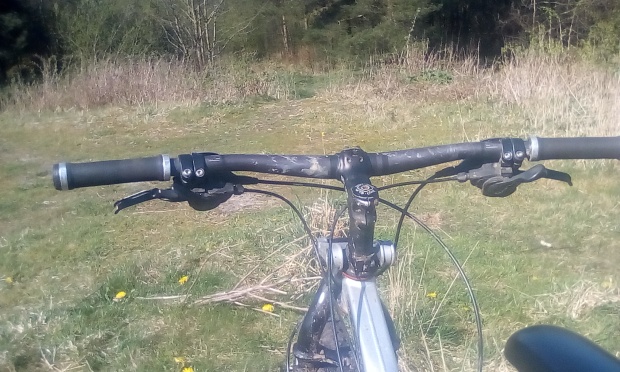 I seem to keep taking pictures at the top of the same downhill. At least the bike is different this time.

The secret little trail feels like my own and links, through a section of exposed roots, to a longer singletrack trail which continues down to meet the gravel road. At the start of this section I made a mistake, turning too far to the left and ending on another trail which climbed. I realised my error straightaway but thought it would be good to follow the trail and see where it ended. It climbed on a gentle gradient and kept going up. It was clearly another route to the top edge of the woods so I kept going. I could see that some work had been done by riders to make easier ways across obstacles, like broken down stone walls from when this was farm land. There were also some fallen trees which had been treated in a similar way. I knew instinctively that this was going to be a blast. I made a mental note of how to get onto the trail at the top and set off. It’s twisty, turning singletrack and it didn’t disappoint. A few places needed confidence to get over awkward obstacles and at the bottom it runs straight into the trail I’d originally intended to ride. This is a great discovery and makes a long segment of truly high quality trail which I regret not discovering years ago. At the bottom I turned right on the gravel road for a short distance before continuing on single track to the bottom of the woods to ride the same trail on the “wrong” side of the river. The total distance must be over a mile of exquisite, natural trail and I’m gagging to get back there!

On the JW4 I set a good number of fastest or nearly fastest ever segment times according to the app. Strava, including the 1.63 miles from White Coppice to the top of Healey Nab. I still had a long downhill on the recently cleared Nab descent and the fast, exciting drop across the fields to enjoy.  I covered 13.81 miles with 1,554 feet of ascent. It was a great ride of discovery and good training with plenty of climbing.