The weather continues to be glorious. I heard that we are getting less high clouds because of a lack of vapour trails from aircraft. As I look out now I can’t see any in a clear blue sky. Water vapour is maybe the only greenhouse gas, which is why we stay warm on a cloudy night. The doom mongers of the global warming lobby will say it’s the lack of carbon dioxide, if the temperature seems cooler than expected this month. They’ll be wrong. Less cloud, colder at night. More cloud, warmer. Is this so difficult to understand?

Enough time on the soapbox, today I went back to Brinscall Woods to ride the trails I’ve just discovered, twice. I’d ride to the top of the area and ride the gravel road which climbs Great Hill, turning off to the right before half way up. From there I’d descend into the woods at the south eastern corner, high up, riding north along the higher edge. I’d then ride about half of the downhill, returning to the northeast corner and ride south to approach the downhill from the opposite direction. This was for future reference so that I’d know the best way to reach the downhill segment. By local standards It’s a long drop and on the second descent I intended to ride the whole of it.

I began with a familiar route which involves a short section of road then an off road section, except for another short road section, all the way to the picturesque village of White Coppice, a distance of around three and a half miles. From there the trail turns much tougher. It’s rocky, with short, steep gradients. I overtook a runner early on then failed to get up the hardest part, just like last time on the Whyte JW4. The Boardman FS Pro that I was riding today is definitely easier on these rough segments but I just don’t think I was concentrating hard enough today. After the technical part is a gravel road climbing up the woods, which I’m finding easier with my improved fitness. The climbing doesn’t end there. The steep tarmac road of Edge Gate Lane leads to the gravel climb to Great Hill. I was putting some effort in, eager to get to the gravity assisted part. The descent starts with a delight. The gradient is never especially steep but the speed is thrilling. A rough, rocky surface is interspersed with smoother, ribbons of dirt trail which are currently bone dry. You need to keep your line accurate to avoid running onto the rougher heather and grass at each side.

Into the woods I was confident that I’d conquer the first rocky section, which I’ve managed on my last two tries after not being able to do it for many years. Clearly I was over confident and need to concentrate harder in future. A number of big trees have fallen across the trail but ways round the obstructions have been fashioned recently in all but one case. I recognised two stone posts, from when the woodland was occupied by farms, which marked the start of my downhill. 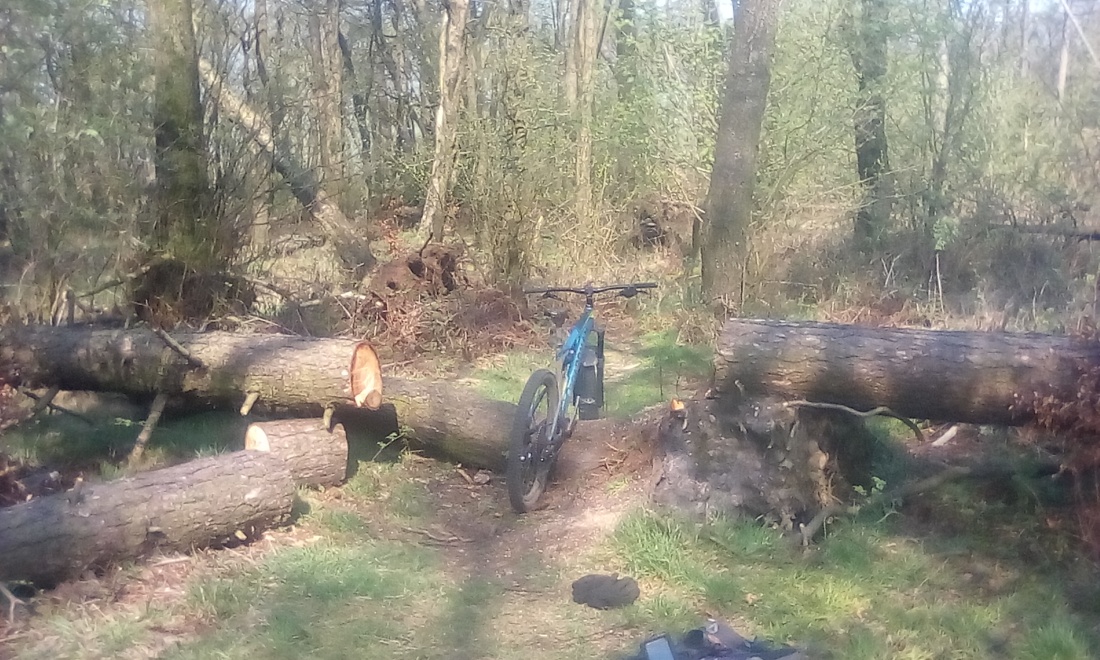 Another fallen tree marks the secret start of a long downhill. I found this from the bottom end and don’t think I’d ever have noticed it from here.

The trail is one of the purest forms of mountain biking. A sinuous, narrow ribbon of dirt scratched into the woodland floor. The twisting trail is studded with stumps, tree trunks and piles of stone to add spice. I returned to the top for my full length run. With more experience it flowed better, the tyres fighting for grip. I needed the odd panic braking where the trail deceived me with it’s twists. I realised later that I’d missed my sharper left turn onto the rest of the descent. No problem. I turned round, still feeling fresh, and rode back to the top for a third try. This time I took the sharp turn correctly and continued down on another superb piece of woodland trial which I’ve also discovered this year. Crossing the gravel fire road which dissects the woods I dropped over 2 rocky drops onto more delightful downhill. It took just over 3 minutes, top to bottom, but the flatter trail which follows the goit still undulates and pays you back for your efforts. At the end I’d taken 5 minutes 38 seconds. In future I’ll ride from the top of Great hill to make around 14 minutes of high quality riding.

The downhill ends at a concrete bridge across the goit, which is a straightened river channel. The goit is joined after White Coppice by Black Brook which runs via various reservoirs to join Chorley’s main river, the Yarrow, a few hundred yards from home.

I crossed the goit and followed the water course to where it feeds into a reservoir then ascended Healey Nab. Interestingly my riding time today was around a minute longer then when I rode the same White Coppice to Healey Nab segment 3 days ago. This could be for several reasons but I’m convinced my 16 year old bike is a faster cross country machine than the modern one. Still, the Boardman thrives on the downhill and I set a fastest time on the new Healey Nab descent. The downhill across an open field from the Nab woods was about as fast as it could ever be. Humps on the surface have you leaving the ground and feeling as if you’re floating. It was a thrilling finale.