After a few days of showery rain I rode Healey Nab today. It’s our nearest significant hill and rises to 680 feet above sea level. From our side the climb starts on pasture where sheep, and occasionally cows, sometimes graze. There are two steeper parts which provide excitement riding down. Today I took it fairy easy on the climb and rode 3 circuits. The manmade mountain bike trails may all have been destroyed by the recent tree felling which was necessary due to an infection of the larch trees but riders have already cleared enough of the twigs and dug away at piles of earth to make a rideable circuit. I thought that today I could ride the circuit and then set it up as a segment on the app. Strava to see how I compared to other riders. To set up a new segment the method is not immediately obvious. First you log on and click on the ride where you’ve ridden the segment. 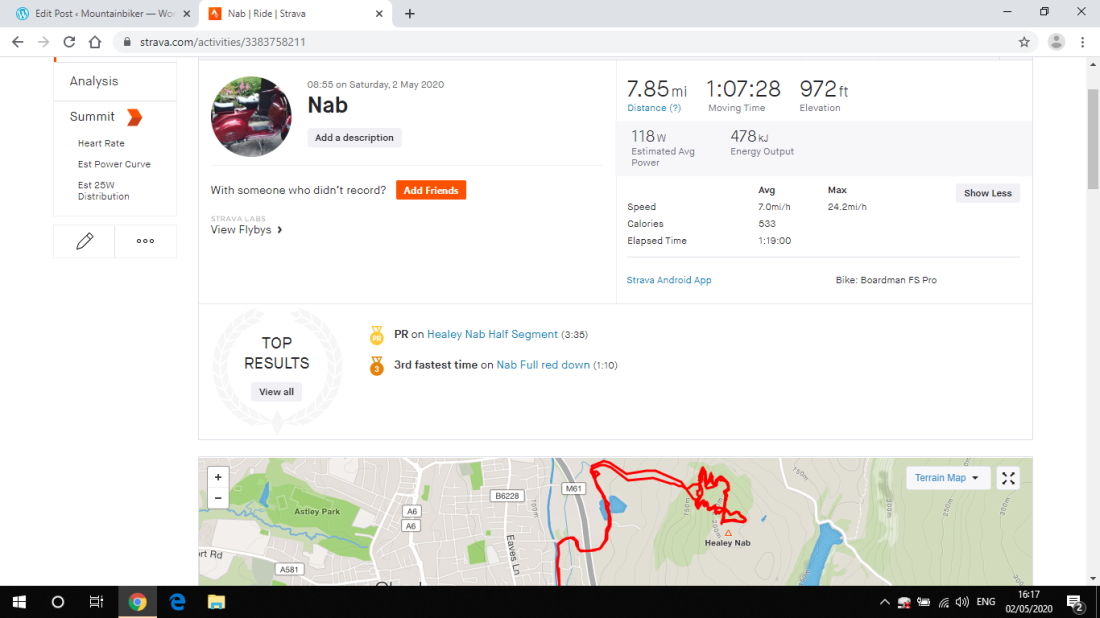 To the left  are three dots which you need to click on. This brings up the setup screen and you can zoom in on the appropriate part of your ride marked by the red line. You set the start and end points, confirm that you’re happy and name your segment. Next time you log on the new segment will appear in your segment list and as if by magic anyone who’s ever ridden the segment will be ranked according to their performance.

On my climb to the trail head I did a little exploration then rode a full lap from the gate at the eastern side. This point marked the start of a segment entitled “Gate, red route, gate”, which is now impossible to ride. My lap started with the same climb and the first downhill section of the old red graded route. The new way down then turns onto a short section of the former black graded route, then takes a nice newly created link to the remainder of the old red route. The downhill twists and turns, mainly on bermed (banked) corners. There are several jumps and it’s a thrilling, flowing piece of trail. I then rode the old section of 9 jumps and continued down a steep, rocky drop. The next section has been cleared sufficiently to ride through but there’s been a lot of damage to the ground from tree felling machinery so the new route is different and harder work than it was before. The old climb has been comprehensively destroyed so I took an old way, which we used before the trail system was built from 2009, to climb to the small, disused quarry. Skirting the edge of the quarry leads back to the trail head and a sinuous, fast downhill to the start/finish point by the gate.

After a slow lap I tried a quicker one and worked hard all the way round. Once you start to search for speed the excitement builds. The slight feeling of risk on slippery surfaces taken as quickly as possible is addictive. The physical effort has it’s own rewards so I enjoyed my lap. I then rode back down the hill but this time used the first part of the old black trail, which has also been cleared. It’s shorter and I’ve never really found it as rewarding as the more flowing red but there’s a gorgeous twisty section of loamy trail to take you down the slope from the line. After that it’s the fast, open downhill and home. I loaded my ride onto Strava and at first noticed not many achievements. I then set up my new circuit as a segment and called it “New gate, red, gate 2020”. And guess what? I was fastest out of 230 riders!

At the bottom of the list of segments is a “Show hidden efforts” button. When I clicked this I was thrilled to find very nice surprise. 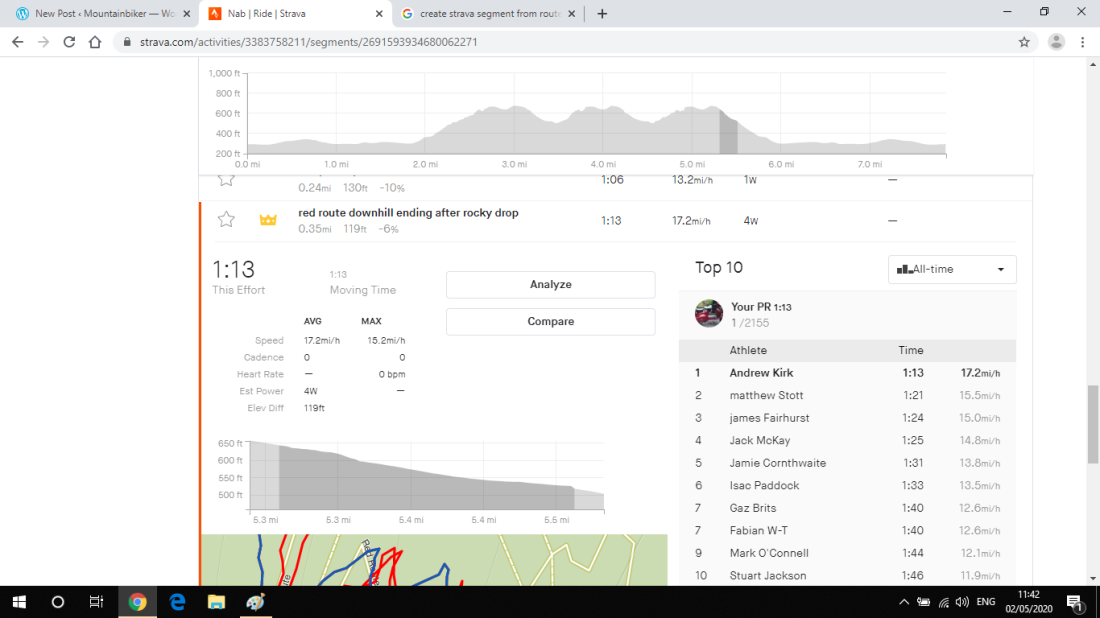 I’d ridden a segment set up some time ago. OK, it may be slightly quicker on the new trail but it’s still good to know that you’ve ridden it faster than any of the 2,155 riders! Crowned King twice in one day. Just make sure you call me “Your Majesty”!