My last ride was something special. I rode a long downhill, shaving over a minute and a half from my previous time. I also set a new fastest ever time for a segment of the downhill on the app. Strava. I beat my previous best time by 2 seconds and crucially was a second faster then the previous best ever and so gained a King of the Mountains accolade. It’s strange in such troubled times, with so many people dying around the world from the Covid 19 virus, to be enjoying my mountain biking so much. The dry, sunny weather has been a blessing after a record breaking wet winter and it shows no sign of deteriorating any time soon. I struggled to think of a ride which could follow the last one so chose something completely different. I thought about going back to Brinscall Woods but decided on a shorter ride to Healey Nab.

I rode down to the Leeds/Liverpool canal but changed my route a little to avoid a potential social distancing problem. I continued to the hamlet of Limbrick where we used to often go to a pub, the Black Horse which has been closed for around the last 7 weeks. I rode up the easy gradients at the back of Healey Nab and before reaching the top at 680 feet I turned off along a trail I enjoyed earlier in the year. The path ends at the far side of a small area of woodland and turning round your faced with a gentle descent. After around 100 yards under the trees the open moorland has a twisty and undulating ribbon which I thought I’d previously set as a Strava segment. I tried a quick descent but towards the end a couple were walking. No problem, I fancied another go anyway. Apparently I never had set it as a Strava segment so don’t know how my efforts compare to other riders but I enjoyed pushing the pace on a short but sweet downhill.

I rode to the top of Healey Nab with the intention of doing a full lap having set the fastest time on the new version of the circuit which has emerged from the devastation caused by tree felling. The lap starts from the back gate and then climbs to the trail head at the top. It’s then a superb downhill using sections of the old red and black graded trails with a linking section fashioned recently by riders. Head down, elbows out, keep your torso fairly level and absorb the bumps with your arms and legs. Don’t just let the suspension do all the work. The next section of 9 jumps is much as it ever was but the surface could do with a good sweep. It’s now slippery due to all the dust and debris lying on the ground. The part which follows has been churned up in the middle but a new variation is emerging which is harder than the old way. The previous climb which constituted around half of the circuit has been totally destroyed but an old climb which predates the mountain bike trails provides a steeper but quicker way back to the trail head then down the sinuous final part to the back gate. I didn’t think I was working so hard and it was only when I got back home that I found I’d improved on my previous time of 10 minutes 20 seconds, recording 9 minutes 49 seconds. 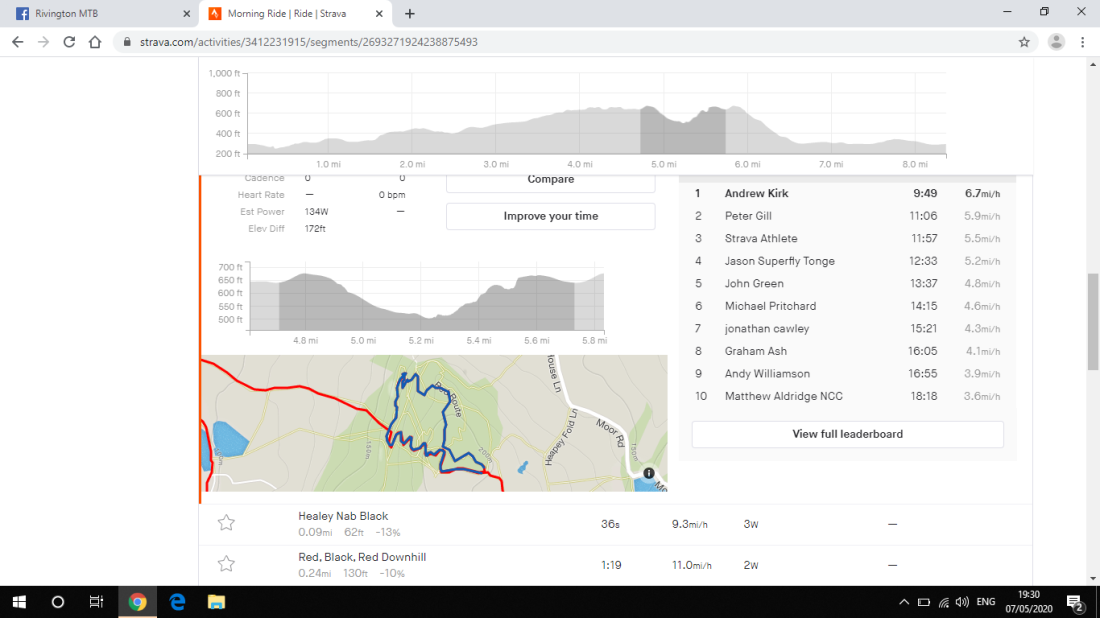 I’ve only included times from this year since the trail didn’t really exist until the trees were cut down. Also I’m at the top of this list but not the all time!

I’d said hello to a couple of people as I passed them at the top and stopped when I returned there. It was nice to chat to some other riders as we would always have done before the Coronavirus but at a safe distance, of course. A guy with 3 children came up from the back gate and joined in the conversation. 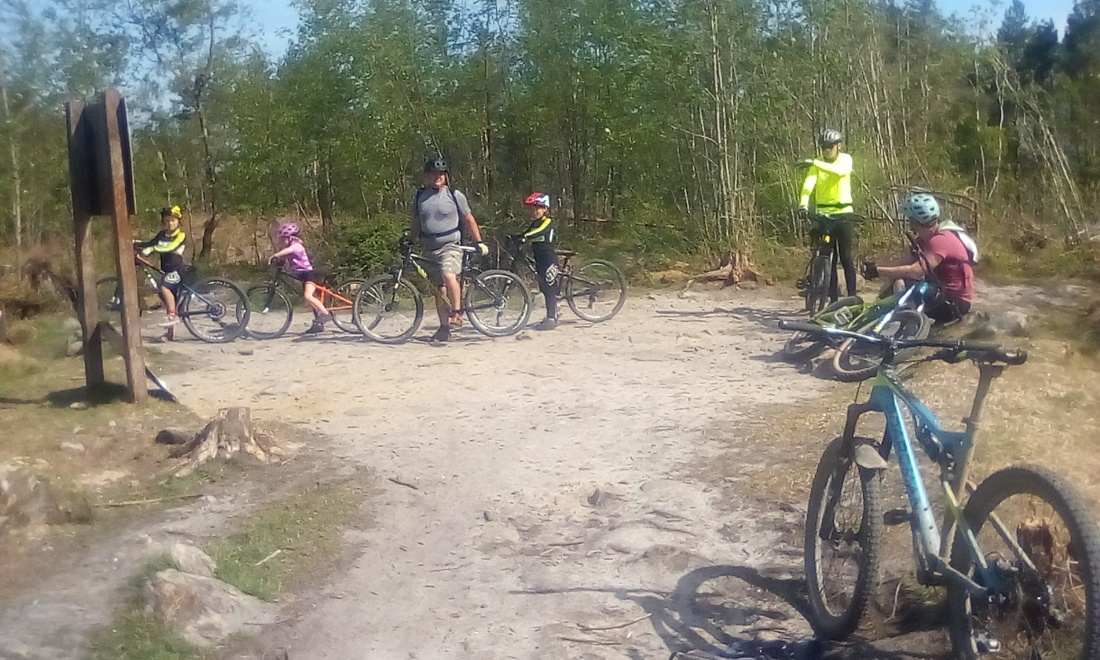 Almost like it used to be except it’s unusually sunny, the trees are gone and we talk from a distance.

I rode down the hill before the family, making sure I kept it safe and didn’t show the youngsters a bad example. I took it easy down the fast, open final descent and continued home. I enjoyed a very different type of ride to many of my recent excursions, covering 8.39 miles and climbing 834 feet in around an hour