Every time I’ve ridden up my local hill, Healey Nab recently, the mountain bike trails have improved. After 2,500 diseased larch trees were felled in March it looked as if we’d never get our man made trail system back but amazing progress has been made. The Coronavirus has prevented any calls for volunteers, so whoever has done the work so far is shrouded in mystery! I’d already put together a full circuit of the hill but it used a narrow walking route around the perimeter of the old quarry. As well as the possibility of conflict with walkers who, if we’re to be honest, have a right of way where our use is tenuous at best, there’s also social distancing to be considered. On a wider trail riders can give other users plenty of space but on a ten inch wide strip of dirt this is not possible. I started my ride to the hill with no particular plan, which is something I usually try to avoid. Having a definite goal for a ride seems to work much better and means a ride never feels like a waste of time. Today, though, I just rode by a steep, open climb to the woodland on top of the hill and started to explore.

First time I climbed  via the revived red graded route as if I was going to then ride around the edge of the quarry. From a high point I rode down a trail that had been part of the destroyed red climb and after going up and down a couple of times I realised that it would be possible to cross a short unresolved area and use a slightly modified version of the old route back to the high point I’d been at before. Last time up I’d followed some wide tracks left by tree felling machines. The right hand of the 2 tracks is now being smoothed out by walkers and riders and makes a good ascent right up to the trail head. I could then ride the top loop, which is little changed in route but a bit churned up in places, before starting the main downhill. I thought it might be a good deed to photograph the less clear parts of the circuit for the benefit of those who don’t know the hill as well as I do to make a guide to the circuit. I rode the top loop and back to the trail head and enjoyed the new main descent. I started on the old red descent but it now takes in a short segment of the black graded downhill and a newly fashioned, fast and flowing section which I’ve really been enjoying. Lower down I rode the section of 9 jumps and along the bottom section. There were few larch trees in this area of the wood so only a short part was destroyed. I stopped here to take my first picture to show a new way that has been fashioned and my own alternative across an easier bit of woodland floor. 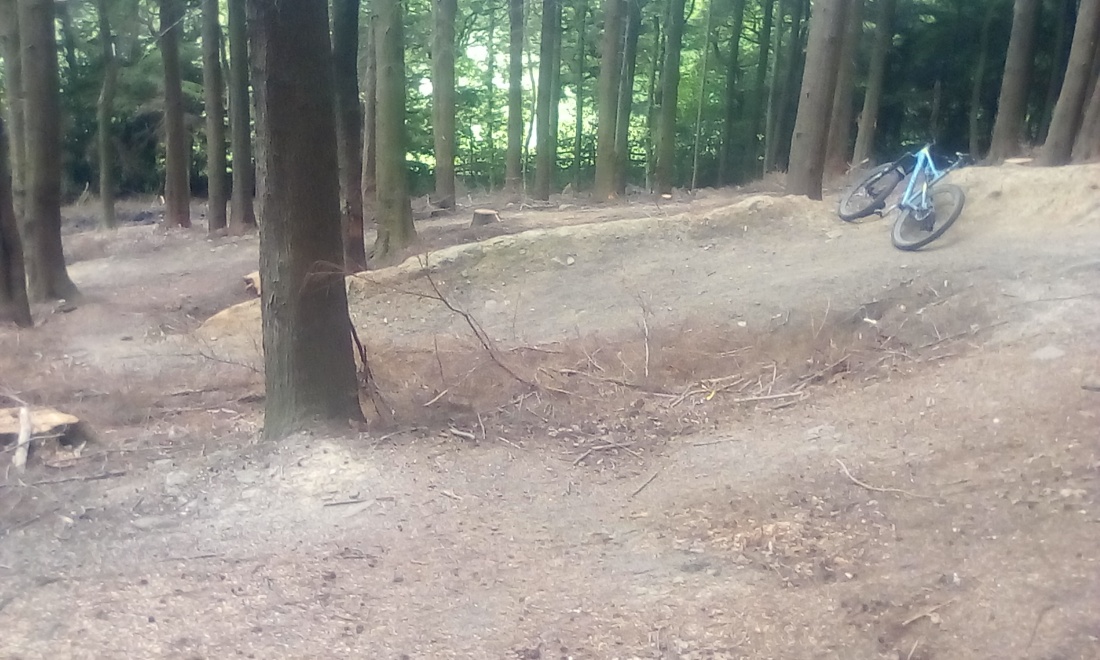 There was a big berm to the left, followed by one to the right. The second berm was beyond repair so a tighter alternative has been made with a very steep climb back to the old trail. Riding through a gap where my bike is laying means you can avoid the steep part, continuing on the old climb which leads to the north end of the woods. A new vehicle parking area was made here, approached by a short, dirt ramp. Turning to the right is another ramp and just 20 yards later is a rather hidden access to the next climb. 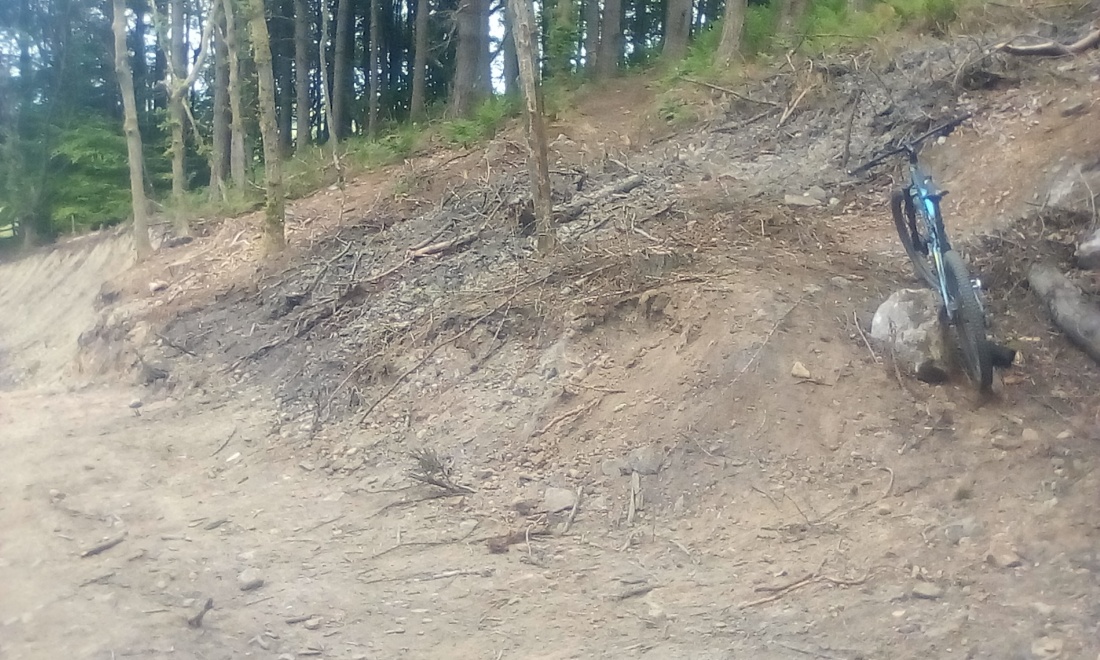 Look for the rock and turn around it. At first it’s rough but soon becomes much as it used to be. Further up the climb part of the trail has been destroyed but some work has been done to make it rideable, you just need to try it a couple of times and the best way is obvious. 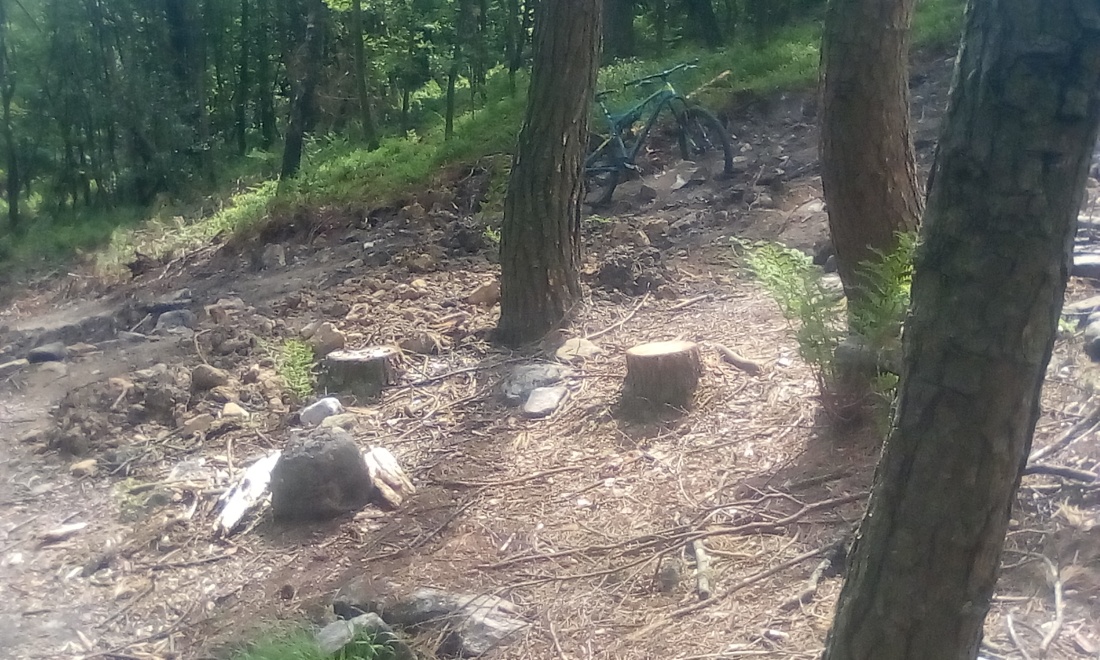 From the left of the picture the track climbs steeply to where the bike is positioned. Another 20 yards later and you can rejoin the old trail.

Look out for the rocks which mark the turn to the left. After, perhaps unsurprisingly, another 20 yards is a little grassy snicket where you turn left again, then right and start a sharp downhill. The picture below shows the grassy cut through. Don’t ride around the quarry to the right, just keep it left.

Back on the old trail you descend and follow an arrow to a narrower track where you will soon find a blockage. You can, however, after just 20 yards, take a left turn then twist to the right where you’ll find yourself in the right hand track left by the tree felling machines.

Now it’s just a case of following the rapidly improving right hand track for a couple of hundred yards to a left turn which is, you guessed it, 20 yards from the trail head. I thought I’d see how long a quick lap would take so launched down the top loop to the back gate. It’s much more gravelly and dusty than it used to be and wheel tracks cut across. Climbing back to the trail head makes a 2 minute circuit then it’s down the main drop to complete what is essentially a second circuit. I was finding the limit of grip at times and discovered later that the app. Strava had ranked me third fastest of all time for the top loop plus main descent!

This segment finishes halfway through the 9 jumps, which I completed and then rode the bottom section and the start of the climb back to the top. I arrived back at the trail head and clicked my stop watch. For any Strava junkies who read this my time for the back loop and main loop was 10 minutes 47 seconds. I think that implies that it’s about 30 seconds quicker than the old top loop plus red and in the very dry conditions is enjoyable. Rain may ruin it. The surface is likely to become sticky clay where the trail cuts across unimproved ground. I’ll just have to wait and see. I still had another long descent to enjoy on my way home, having climbed a little over 1,000 feet in eight and a half miles.