I can’t remember a time when I didn’t ride for 11 days but due to my trip to Europe that’s how long it’s been since my last ride. Yesterday I was back and it felt great to be out again. It was sunny with clear blue skies, perfect conditions for a ride. The picture above shows a view of Rivington Pike from Healey Nab.

There’s been quite a lot of rain since I’ve been away and it’s been cool so the trails, though drying, are still damp. It’s amazing how a slight dampness affects your time around a trail. The extra tyre drag takes the edge off your speed. Still, as time goes by we seem to be accepting wider and wider tyres, which in themselves are bound to create more drag. That’s the reason that my older bikes with narrower, 26″ wheels, seem to be faster around my local red graded circuit. There’d be no competing with the stopwatch today, though. I just rode 3 alternative circuits combining the red and black trails and was delighted to be out in the environment. I took some more pictures from the summit of the hill, which is marked by a cairn. I could just about make out the distant hills in North Wales and the Lake District to the south west and north west. I’m hoping to get some riding in both of these areas this summer. Unfortunately since I’m now a lone rider it’s not as appealing to drive for 90 minutes or more for a ride. It’s different when you’re with a group of mates but I’m coming to terms with the fact that even though only one of my old pack is still riding, that one is me. 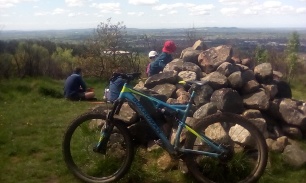 The garden has certainly put some growth on whilst I was away. It’s in a bit of a hiatus between spring bulbs and summer flowers but the next 2 weeks will see big changes. I was looking into gardens in Belgium and Holland last week but saw very little. Gardening just doesn’t seem to be such a big passion in Europe as it is in Britain. You see the odd nice garden which isn’t just cut grass but it’s quite rare.