A month ago I was doubtful as to whether I’d ever be able to write the title of this post. After almost 30 years of riding my nearest hill the larch trees have succumbed to a fungal disease and all 2,500 have had to be cut down. This has destroyed much of the man made trail network which has been constructed over the last 10 years as well as the many other trails used by walkers and riders. The stacks of logs have now been removed leaving twigs strewn everywhere. In places deep ruts have been dug by the forestry machinery leaving only glimpses of the former trails. When I rode back over the hill on Saturday I was very happy to find that a usable section of mixed red and black graded downhill trail had already been cleared, undoubtedly by  some anxious and enthusiastic riders. Today I wanted to ride this downhill and try to find, or to clear, a serviceable route back to the top. I started to feel a little cynical about the whole process. Surely diseased wood must include the twigs as well as the thick pieces of timber. Was it all just an excuse to cut down and sell the trees, providing a profit for the water company which owns the hill, but a great loss to all lovers of the area? Whatever the truth the hill is a mess. 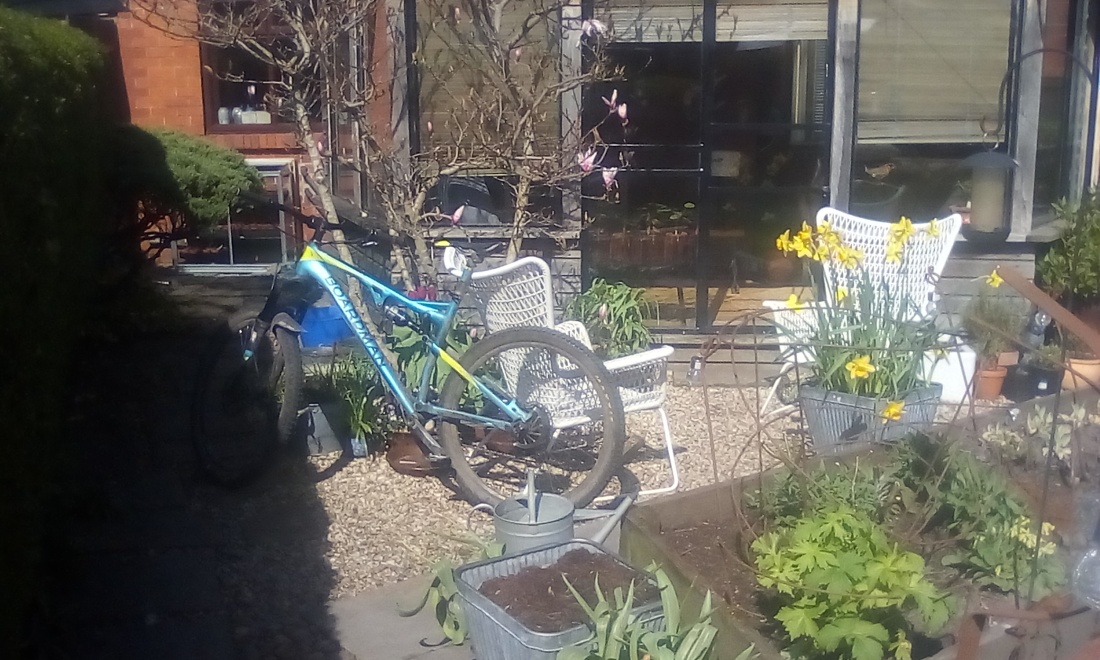 After around 3 weeks of  dry weather the garden is looking as good as the trails.

Today was a beautiful spring day so first I walked my dog, Freddie, up the hill to see what things looked like on foot. I soon realised that without at least a rake it would be very difficult to move the thick carpet of twigs from any trail which hadn’t yet been worked on. I also found that the vehicle tracks across what had previously been my favourite segment of the trail were especially bad and little was left underneath the twigs which could be saved. I resolved to return later on my bike and try to find a route back to the trail head so that I could ride a circuit of the hill.

I climbed the western side of the hill which has been too wet to attempt until recently after such a soaking wet winter. Today it was almost bone dry so I put some effort in on the climb. It climbs a little over 150 feet on a bumpy grass surface. I was surprised later to find that, despite pushing myself, I’d ridden the ascent a few seconds quicker last year. Once I got up into the woodland I found that no attempt had been made to clear the climb to the top. After the downhill is a section of jumps which were clear and usable as I’d found on my last ride. I tried to fashion a way along the next undulating section and cleared enough debris to be able to get through but in wet weather it would be impossible. I used a clear trail up to the disused quarry which is very steep. I got up without a foot down, which is something which had taken me many attempts to nail in the mid 1990s, though I must admit that modern bikes are better in many ways. I now have front and rear suspension and lower gearing plus tyres which are vastly superior so I suppose I should have made it.

Rather than going straight to the trail head I explored the eastern side of the hill and, as I suspected from previous rides, I found the ground to be absolutely destroyed. There was a clear trail through but non of the  mountain bike trails were even visible. Unfortunately I needed to lift the bike over 2 gates on this route which would ruin the flow of a fast lap. From the top, though, the descent was superb. There’s a lot of grit and other slippery debris on the trail and the lack of trees makes it feel unfamiliar but it was well worth the climb  for a downhill like this. I’m being careful not to exceed the limit with the potential for injury. I’ll try to keep my biggest efforts for climbing and other safer segments. The section of black graded trail in the middle has actually improved because some awkward rocks have been displaced, then it’s back on the red trail down to the jumps. Some additional, unofficial jumps have even been added in a couple of places but they add nothing to the ride. I struggled along the bottom section and got a bit diverted from my intended route. I need to relearn the trail because it isn’t well marked and it’s impossible to follow the old way. I chose a different and even steeper climb back to the top which I know I could ride many years ago. I’ll have a go when I’m fresh. I rode the downhill again then descended from the woodland to Black Brook and home.

It was a short ride of just over an hour of riding time but I spent another half hour clearing the ground. I’m very happy to be back on Healey Nab and will have to help out on dig days once the Covid 19 virus allows us to.