Thirteen minutes and fifty seconds was the time I set last time I rode from the top of Great Hill down a big, mainly downhill trail to the Goit, which is a straightened river. Today my plan was to ride the same downhill but making sure it wasn’t a race against myself, with the inherent risks of such a venture. What I thought I could do was to add on a climb and another drop around two thirds of the way down.That way my time would not compare to my previous efforts and I wouldn’t find myself taking risks. The problem with modern technology, like the GPS based app. Strava is that every detail of my ride would be stored so if I wanted to I could remove the extra loop from my ride and still know how long the previous route would have taken.

I started by riding my established way to White Coppice and took the easier side of the Goit to Brinscall Woods. I’ve been thinking about the far end of the woodland and wondering if there were any trails in an area I hadn’t explored, so I rode past the two option to climb the woods and waited until I found a viable track. It rose gently on single track and joined a steeper trail before a stream, which tumbles down over waterfalls. I soon realised that it’s a trail I have ridden before from the top and it was unrideable due to fallen trees and a savage gradient. 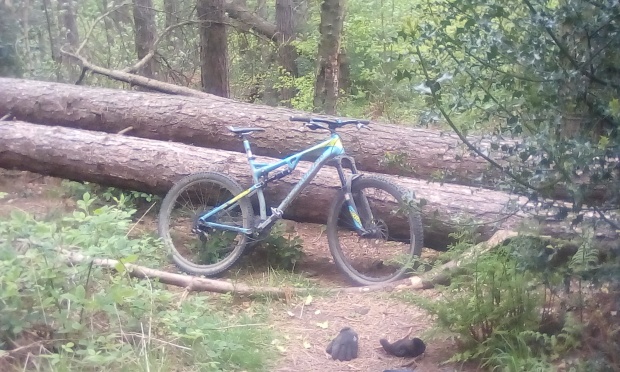 Looking down the hill. You’re not getting over those on a bike!

I pushed for a short distance then managed to get going again to reach the fire road near the top. Although it hadn’t been good riding it was of value to make sure I’d thoroughly explored the area. I briefly joined the tarmac of Edge Gate Lane until it ends at the initially gravel road up to the summit of Great Hill at around 1,250 feet above sea level. The sea is visible around 15 miles to the west from there. I thought that the gravel is settling down, becoming more hard pack so in the next week I hope to have another attempt at one of my two targets which I set in January. I hope to beat last years time to the top of the hill and back from the top of the tarmac. Today I was treated to a fairly strong north wind which had been blowing against me for much of the ride so far. Now my climb was beginning with a southerly direction and hence a tail wind. As the trail turns through a little over ninety degrees and the wind swirls around the hilltops I found it very much against me on the rougher, rockier part of the ascent. At least it would be behind me on the way down.

I started on a Strava segment called YeeeeHaaaa! which aptly describes a rocky, twist roller coaster. I set my fastest ever time! What happened to all my thoughts about safety? The same story played out on the next section even though I slowed for a particularly rough part to hopefully avoid bursting a tyre. After that the trail starts it’s turn to the north so I was into a headwind until I turned west on the fabulous trail to the top side of the woods. This one really is a delight in perfect bone dry form so it wasn’t hard to set another fastest ever time! Over the stile into the woods and I messed up the first rocky hump, overbalancing and grinding to a halt. Still the wasted time was supposed to be of no concern to me today. Along the top of the woods, over three fallen trees and the amazing, long single track descent starts. I was loving it and started on my planned extra loop later on. The steep climb over many tree  roots broke the flow of the downhill even if I was repaid to some extent by an extra downhill section to rejoin my original route. This is the kind of riding I value the most. Speed with just a few prods of the pedals. Perfect narrow trails swooping across the woodland floor on a loamy surface which only nature could provide. Someone keeps adding some very amateur extra features like low, rather pointless berms and flimsy looking tiny jumps. I wish they’d leave it alone! On the final section I was one second slower than my recent Strava King of the Mountains time of 1 minute 12 seconds. That means that I’ve recently set times of 1 minute 14, 1 minute 12 and now 1 minute 13! That’s consistency and I think a sign of good riding. Riding back towards Healey Nab I passed a group of around 9 riders, defying the current ban on such gatherings. I saw a family walking along the next section of trail so chose the technical side of the Goit. I ducked under the fallen tree and launched at the next steep, rooty climb. I made it! This is the hardest part of the section and I was very happy to make it up without a run up due to the tree.

I climbed Healey Nab starting to feel the effort of the ride so far. I went straight into the descent but saw some familiar faces working on a new trail. Hypocritically I’ll forgive them for associating together in defiance of the ban on gatherings because they’ve already cleared a good downhill and are now making another, after this year’s major tree felling. I stopped for a brief chat before carrying on to home. I’d covered 15.91 miles with 1,451 feet of climbing on my ride. So if I use Strava to subtract my extra loop from the big downhill, did I beat 13 minutes 50 seconds? You know I’m not going to look. After such an excellent ride who even cares?